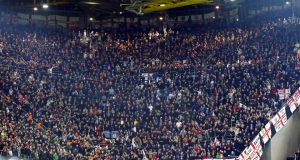 FA chairman Greg Clarke has condemned the “inappropriate, disrespectful and disappointing” behaviour of some England fans in Germany on Wednesday night.

The FA and police are to review video footage in a bid to identify, and potentially ban, those involved.

Clarke said: “The behaviour of a section of the England support in Dortmund last night was inappropriate, disrespectful and disappointing.

“The FA has consistently urged supporters to show respect and not to chant songs that could be regarded as insulting to others.

“Individuals who engage in such behaviour do not represent the overwhelming majority of England fans nor the values and identity we should aspire to as a football nation.

“We are working with the England Supporters Travel Club and speaking with the Football Supporters’ Federation to come together to address this issue.

“Everyone involved in the game has a responsibility to ensure that attending a football match is a safe and enjoyable experience for all.”

The match, which was settled by Lukas Podolski’s second-half goal, went ahead just hours after the Westminster terror attack.

And although it was a night of promise for a young England side on the field, off it the actions of some fans in the away end left a black mark against England’s name.

A Football Supporters’ Federation spokesperson said: “Over the last 20 years English football fans have built a worldwide reputation for our passionate support and the vocal backing we give to our teams.

“Unfortunately, little of the wit and imagination that goes into our club football songs is reflected at England games.

“England’s travelling support is made of people of all ages from a range of clubs, many of whom have worked hard in recent years to improve our standing abroad and have expressed concern to us about these chants.

“We don’t want to regress to a situation where that reputation is tarnished by the actions of a minority.”

An England fan in Dortmund claimed FA action to cut out obscene chanting was long overdue.

The fan, who wished to remain anonymous, said: “The FA has to start being much more proactive on this stuff, it’s been getting worse over the last couple of years.

“It’s all well and good issuing banning orders for being drunk at a game back home, but there are some seriously disgusting people that are still allowed to associate themselves with the travelling fan base.”

England manager Gareth Southgate was asked about the songs in the post-match press conference, and urged the travelling fans to support their side in the right way.

“To be honest, I didn’t hear what was said but it has been mentioned to me,” he said.

“Obviously our travelling support in terms of number and the way they back the team is brilliant.

“We would encourage them to do that in the right way at all times.”

1 Solskjær praises Martial for building himself into ‘powerhouse’ centre forward
2 Liverpool to sign Olympiakos left back Kostas Tsimikas
3 No final round heroics for Rory McIlroy at US PGA
4 Rory McIlroy puts integrity ahead of glory in US PGA second round
5 Tyrone’s McShane ruled out for rest of the season
Real news has value SUBSCRIBE
Crossword Get access to over 6,000 interactive crosswords