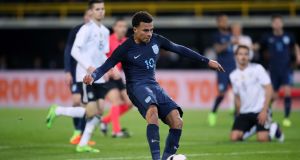 On a still, at times rather slow-burn night in Dortmund England did enough to win, ended up losing, but still looked in patches like a team feeling away at the edges of its new shape, exploring with interest some new post-Rooney attacking gears.

By the end they had also received a lesson in how to win, in the importance of cold hard edge in between the grace notes. Lukas Podolski hadn’t really done much by the 69th minute of this match. He touched the ball thirty times in all, chugged about eagerly, perhaps looked a little puffed towards the end. But when the ball did finally arrive at his feet in just the right spot he took the game away from England, looking up, seeing the space in front of him and spanking a wonderful shot into the top corner past Joe Hart.

Signal Park had its moment, high point of a lovely if surprisingly vehement and committed night of celebration in honour Arsenal’s one-time third choice striker, which ended with Podolksi being hurled into the air by his teammates to huge cheers, followed by an extended TV phone-in-gramme featuring Podolski tributes, Podolski family members, Podolski ultras.

The opening hour this friendly had threatened to be something else. Until then this was a night decorated by the fine movement and cute attacking interplay of Dele Alli, right. The two make for an interesting comparison. Alli is a better mover, a more compete athlete a player of real grace and high ceilinged talent. Podolski, on the other hand, hasn’t really had a significant club football season for about six years.

Still, it isn’t hard to see why they love him here. With Germany he simply takes his moments. This was Podolski’s 49th international goal, a ride that has taken in that run of semi-finals and not-quites through to the catharsis of another world title in Rio de Janeiro. Podolski is in many ways an old-style German footballer, not the more recent academy darlings, those fancy soft-shoed technical marvels, but a ball-walloping moment-seizing German, a flashback to the Iron Mullet Years, all edge and match-turning bloody-mindedness.

If there is a lesson it is perhaps the need to take on a little of that edge. Albeit not the only one on a quietly encouraging night. This was at times a testimonial-paced game. Germany may have played like a team in a holding pattern for the opening hour. But England did find something new here, not least in a genuinely compelling first half for Alli, backed by another fine, hustling, silky performance from Adam Lallana.

Crumbs from the table perhaps on an underwhelming night. But whatever the occasion Alli looked a compelling footballer at times in Signal Park. He has a lovely strut to his movements whatever the opponent, a very obvious belief that he belongs on any pitch and in any company. Yes: in a friendly, and in defeat too. But this was still Germany, and Alli really he did play well here, creeping about the pitch with malevolent grace, and only lacking a finish when a clear chance came his way.

Signal Park is a huge reverberating space. At kick off its steeply banked stands were already rolling with waves of noise from all sides. England’s fans had been vigorously present in the city centre all day, running through their repertoire of ironical second world war references. Here they were crammed into a distant corner slice of the Park, but still bouncing and dancing and serenading the Queen, Jermain Defoe, the Pope.

Alli was sparky and cute in the early moments, often moving from inside to out and enjoying the willing, supercharged, rather wild movement of Jamie Vardy ahead of him.

Twice Alli was fouled holding the ball up in between the lines with his back to goal, spooking Antonio Rudiger into dragging him down. Popping up on the right he rustled up a lovely switch of feet to cut inside Jonas Hector, cradling the ball in his instep then flicking it past in a Ronaldinho-style slingshot action, the ball never leaving his foot.

Alli and Lallana: it looked a promising double act in those moments, a complementary meeting of running power and soft switches of feet, with Lallana always alive to the shifting planes around him. As the break loomed Alli should have scored. All three forward players pressed Germany’s backline and stole the ball. Suddenly Alli was all alone in a huge pocket of space. He hit the ball hard and low but too close to Marc-André ter Stegen.

What to do with those glimpses now? The most fascinating thing about England’s 3-2 victory in Berlin last year was the way the manager Roy Hodgson completely disregarded the key elements that made it happen, refusing to take a germ of that victory, the best of his time, and make it the basis for the summer tournament.

That day England played without Wayne Rooney, and with Harry Kane and Alli in close creative proximity, as they had been all winter for Spurs. All of which was simply thrown away come the summer, Rooney shoehorned into an under-geared midfield, Alli asked to play wider.

Gareth Southgate is nothing if not diligent. Even in defeat, and with chances missed, the manager will surely take an idea of how his budding attack might function. This was a refreshingly funky-looking selection all round. Friendly or not, the shape and the team worked for an hour.

It might just work again with a little patience in that pairing of swift, eager No10s, and above all little more edge.