Even without Séamus Coleman and Robbie Brady, a win is not beyond possibility 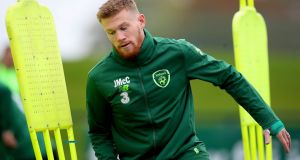 James McClean at the Republic of Ireland squad training in Dublin on Friday. Photograph: Ryan Byrne/Inpho

Martin O’Neill says that he feels some of his players have suffered a little as they struggled to meet the expectations they generated for themselves while reaching the knockout stages of the European Championships a couple of years ago. He and the wider team, at least, have no such issue to contend with as they prepare to meet Denmark again.

Everyone involved goes into this game under the shadow cast by the slightly shocking nature of Ireland’s defeats in the team’s last two competitive outings. O’Neill takes exception to the two being so closely linked when they were 10 months part, suggesting, in effect, they were two entirely unrelated bad days at the office. With three more Nations League games to come against the same two teams, we really could do with dispelling the notion that we might be heading for the equivalent of a very bad week.

Ireland will be without their captain, Séamus Coleman, and set-piece specialist Robbie Brady, but if these things were a trade then they would probably still look to be ahead given that Christian Eriksen will be absent for the Danes.

Age Hareide has more Premier League players at his disposal than his old friend, and as many again from Europe’s other top leagues, but there is no getting away from the fact that his side does not look nearly so daunting without a player who dominates the attacking side of Denmark’s game.

In Dublin last year, the midfielder carved Ireland open once O’Neill’s side was committed to chasing the game in the second half. In his absence, Ireland will not feel nearly so vulnerable, although the changed nature of this match means that the hosts are hugely unlikely to play with anything like the level of abandon they displayed as that night wore on.

On the face of it, it will not be hard to achieve something that might be described as an improvement after having conceded five and four, but O’Neill insists he has no need to “steady the ship” and so, with a fair bit still to be played for, it will be interesting to see the extent to which he pushes for a win. There is prize money up for grabs here and notionally even the chance to provide some insurance against a poor qualification campaign, but the most immediate concern is to avoid last place in this three-team pool as that would mean being a third rather than a second seed in December’s draw for the Euro2020 qualification group stage.

Achieving even a second-place finish is, realistically, going to require at least one of these two home games to be won, and if the first does not go well it will be that much harder to see how O’Neill can spark a significant improvement before Tuesday.

Harry Arter should probably start in central midfield, but after all that has gone on it seems a little unlikely

His hopes here seem to rest on a tactical shift he has been toying with for a while now: allowing his players to pose a sustained threat to their opponents without getting opened again at the back. He will, he has heavily hinted, go with three central defenders and wing backs, and, if that’s the case, then Coleman’s absence will surely open the door for Matt Doherty whose case for starting ahead of Cyrus Christie has surely become unanswerable in recent weeks.

The bigger issue with the formation is on the left where Enda Stevens is likely to face a tougher test than in Cardiff, where the Welsh were largely done by the time he came on for Stephen Ward. Both he and Doherty will bear a fair bit of responsibility for getting the ball into the box from wide areas.

It is far from clear who will be there if they do. Shane Long trained on Friday and still looks an obvious option if he is fully fit, possibly with Callum Robinson playing off him. The latter’s goals of late count heavily in his favour at a time when Sean Maguire is only returning from injury and Scott Hogan has not been playing competitively. Aiden O’Brien’s performance in Poland, though, may also have given the manager something to think about.

Beyond that, it will largely be about a couple of players being an awful lot better than they were in Wales. Harry Arter should, on the face of it, probably start in central midfield, but after all that has gone on it seems a little unlikely. Jeff Hendrick, who was on hand at the pre-match press conference on Friday to say how much he “enjoys” Roy Keane’s interactions with the players, is certain to start, with Callum O’Dowda possibly edging out the likes of Alan Browne and Conor Hourihane if Arter is omitted.

Even against a side that is missing its standout star player, winning somehow seems like a decent-sized ask right now. That’s what happens, though, when a couple of calamitous performances send expectations crashing.