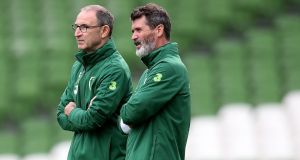 Whenever the Martin O’Neill era does end, rightful tribute will be paid to the fabulous night in Dublin three years ago when his Ireland team humbled Germany, then the World Cup champions, with a trademark 1-0 win, and to the emotive scenes against Italy in the European Championships in Lille.

It is possible, though, that when he reviews this period in his football life, O’Neill himself might sometimes turn his mind to the grittier triumph in Vienna against Austria in November 2016 as a moment when everything seemed possible. Those 90 minutes, spinning around James McClean’s 48th-minute goal, caught the best of the inherent resolve of the Irish dressing room along with O’Neill’s pragmatism and talent for grinding out huge results in unlovely games.

Ireland sabotaged Austria’s lofty ambitions that night, gritting teeth through an early rampant onslaught by the home team and then sucking all life and adventure out of the encounter before the next half hour. The home crowd was already thoroughly disoriented by the time McClean, seizing an opportunity created by a sublime Wes Hoolahan left foot pivot pass from central midfield, actually scored.

It finished 1-0, and O’Neill was naturally buoyant. Of Seamus Coleman, who captained the team that evening, he enthused: “Coleman is great. He’s a great player. He’s taken that captaincy on like you wouldn’t believe.” He was just as euphoric about the feeling in the squad. “There’s a good spirit. I think some of the senior lads help to promote that. I think John O’Shea is excellent doing it as well. We’re not so bad ourselves in the back room.”

You could all but hear the boys whistling the theme to The Great Escape in the dressing room. O’Neill is an elusive figure and always difficult to read. But on nights like that, when he is sparkling with enthusiasm, you get a sense of the qualities that have enabled him to survive and often flourish in the cut-throat game of elite football management. That win marked the first time in well over a decade since Ireland had won four consecutive games against countries placed higher than them on the Fifa rankings. Long’s famous bolt past Manuel Neuer initiated a significant run of heavyweight wins: Germany, Bosnia, Italy and then Austria. Irrespective of how you felt about O’Neill’s vision for how Ireland should play the game, it was impossible to argue with the results.

That mood of absolute togetherness and purpose couldn’t seem further away this weekend. Jürgen Klopp’s frustrated dismissal of the Nations League as “the most senseless competition in the world” may be true. But it coincides with a crucial period in the current chapter for the Republic of Ireland team. This, right now, is the low ebb of the O’Neill era.

What happened? Where did the solidarity and buoyancy of Vienna go? The horrific injury suffered by Coleman in the next competitive outing after Vienna, against Wales in Dublin, was arguably a turning point. It was a dark moment in a grim game, and it felt like the team never fully recovered its equilibrium for the remainder of the campaign. Ireland haven’t played a meaningful football match since the night Denmark eviscerated Irish hopes in the World Cup play-offs with that 5-1 mauling in Dublin. That was 11 months ago. Since then, the Republic of Ireland team has drifted through the torpor of friendly games in the build-up to the World Cup in Russia before lapsing into a series of minor crises this autumn.

O’Neill now has no choice but to wait and see if Declan Rice decides to commit his international future to Ireland or to England, the country of his birth. The sometimes maligned Glenn Whelan will hardly appear in a competitive Irish midfield selection again. Wes Hoolahan, the team’s most creative force, was among the senior players to retire this year. Losing a midfielder as promising and assured as Rice would be an absence felt long after O’Neill has stepped down. Only Rice knows whether his reported dressing-down by Roy Keane during the summer has contributed to his decision to sit out the Nations League and consider his international allegiance.

Harry Arter’s publicised stand-off with Keane hasn’t prevented his return for the next series of games but James McClean’s remarks this week, that Arter was “wrong” to leave the squad training, hints at the tension created by the episode.

The squad’s limited attacking options are the chief on-field dilemma going into tonight’s game. Shane Long, for all his graft, is 31, recovering from injury and enduring a painful spell in which he is unable to find the net for either Southampton or Ireland. The 4-1 hammering by Wales in Cardiff last month hasn’t helped to sell this evening’s fixture against Denmark or the corresponding game against Ryan Giggs’s team next Tuesday evening. The FAI’s decision not to drop ticket prices won’t help to bring a crowd. The Aviva can be quiet even when it’s full: the next two games could be funereal.

Poor results in the next two games will leave Ireland with a third place seeding for the upcoming Euro 2020 qualifying draw in 2020. The aggregate results of the last two games – nine goals against, two for – don’t reflect the resilience of O’Neill’s teams over his period in charge. But it is impossible to ignore such an alarming dip in form, mood and momentum. It feels as if everything has stalled.

The Irish fans who buy tickets to see the team over the next two games can at least console themselves that they are supporting the team when the players need it most. Ireland teams thrive on a contrary defiance and stickiness and a belief that, somehow, they will find a way. All of that has been lost over the past few months. Ireland and O’Neill now have to fight through the most senseless competition in the world to try and find themselves again.