Jeff Hendrick has praised Roy Keane’s influence on the squad, saying it is positive 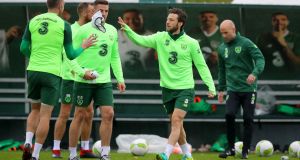 Ireland’s Harry Arter during training ahead of the Nations League matches against Denmark and Wales. Photo: Ryan Byrne/Inpho

Martin O’Neill has a full squad available to him for Saturday’s Nations League game against Denmark with Southampton striker Shane Long taking a full part in the squad’s final training session at Abbotstown.

The manager says that he sees the coming days as an opportunity to bounce back from what was a bad night in Cardiff but admits to feeling some relief too that these games are taking place at a time when he would otherwise have been having to cope without the likes of Seamus Coleman and Robbie Brady for qualification group stage matches.

“We’ve only played the one game and obviously we got beaten by Wales but we’ve got these games to redress the balance if we can,” he said at his pre-match press conference. “Rather than play a whole host of friendly games have welcomed it (the Nations League).

“It’s not to everyone’s liking but it’s fine. Had the competition not happened and we had gone into the qualifying as you would normally do then we would have been going into those game with a whole host of players who would normally playing for us not available. So as it is you would be hoping that they will b back for us in March.

“Denmark beat us convincingly last year and so I think we would like to address that if we can. It’s still the preliminary stage of the league, there are three points up for grabs and we ‘d like to win the game if we can.”

O’Neill confirmed that Jeff Hendrick, who attended the press conference with him, will start the game but declined to get into any detail about the rest of his likely starting line up. He has, he suggested, some decisions still to make, especially up front where he has tried a few options in recent months without any outstanding success.

“Some of the players here are trying to adapt. I think they all feel that they don’t want to be one cap wonders. Some of the players who did fine for us in Poland have found themselves not playing for their club at Championship level so then they have to come back to us and start adjust again for international football.”

Harry Arter is, he says, in contention to play a part after having returned to the squad. O’Neill said that the player and Roy Keane have sorted out their differences.

Hendrick, meanwhile, said that Keane’s influence on the squad is a positive one. “I enjoy it. After the last game we played Wales we looked back at it and there were a few clips that I didn’t go well in. He sat me down went through it with me, tried to help and I thought I did better in Poland. I think there he would be other players that he did that with.”

1 Gordon D’Arcy: Losing such a big game shines a very harsh light on certain players
2 Seán Moran: Fallout from Tyrone final celebrations will concern GAA
3 Luis Suarez leaves Barcelona for Atletico Madrid in €6m deal
4 Ken Early: Like Napoleon, Mourinho is the outsider always trying to prove himself
5 How Dundalk’s opponents Sheriff started on wrong side of the law
Real news has value SUBSCRIBE
Crossword Get access to over 6,000 interactive crosswords