‘Everyone was talking about the final’: Roy Keane sticks the boot in 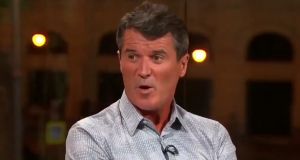 England bowed out of the World Cup last night after falling to a 2-1 defeat against Croatia in the semi-final in Moscow. While English fans grappled with the realisation football was absolutely not “coming home”, Republic of Ireland assistant coach Roy Keane was engaged in an entertaining exchange with former England player Ian Wright on ITV.

In the aftermath of the game, Keane was quick to criticise England for not focusing on one game at a time, and instead “getting carried away” about the prospect of facing France in the final on Sunday.

“You have to focus just on one game,” said Keane, “and everybody was talking about ‘the final’, ‘football’s coming home’.”

Speaking to Wright, Keane said the pundits needed a reality check: “I don’t mind you being happy, but you were getting carried away. You were planning the final, where the parades were . . . you need a reality check.”

Keane replied: “You should get excited when they get to the final, this was the semi-final (and) the group matches (when the pundits were talking about the final).”

Voices then became raised and the two engaged in a tense back-and-forth as Gary Neville and Lee Dixon tried not to laugh.

“You’re a grown man, you played the game,” said Keane. “You know how hard it is to get to these big finals, or even get to a World Cup.”

Wright then began to say the word “final” in what appeared to be an attempt at an impression of the Corkman.

“You know what I’m talking about, relax yourself,” said Keane.

England will now face Belgium in the third-place play off on Saturday in Saint Petersburg. Croatia will meet France in the final on Sunday.

Over half a million people watched Limerick v Galway on RTÉ 15:16
IRFU hopes to open contract talks with players in January 15:15
IRFU hopes to open contract negotiations with players in January 14:56
Pauw: Delay in Ireland’s Covid-19 test results compared to Germany is ‘unfair’ 12:55
Full 36-player panels to be allowed at intercounty matches under Level 3 12:46