Wilfried Zaha snatches point for Palace in the 97th minute 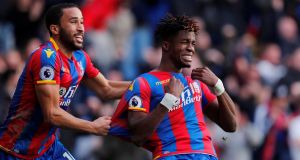 Palace a 2-2 draw at home to West Ham. Bilic had admitted this was another crunch few days for his future as manager and the visitors looked on course for a morale-boosting win when Javier Hernandez and Andre Ayew put them two up at Selhurst Park. But

Palace came roaring back in the second half as Luka Milivojevic’s penalty and a stoppage-time strike from Zaha earned Roy Hodgson’s men a dramatic point.

Darren Fletcher volleyed his first goal for Stoke to take the wind out of Watford’s sails. The Hornets were looking to cement their place in the top six, but Fletcher’s Paul Scholes-style strike from the edge of the area secured a first away win for City.

The 1-0 victory also eased the pressure on Stoke manager Mark Hughes, who was in danger of becoming the latest boss under the microscope following four defeats in five matches.