Diarmaid Ferriter: Best and worst of times through prism of Italia ’90 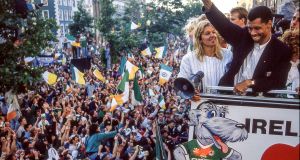 Discussing soccer with historian Prof Ronan Fanning is not something I had ever contemplated. But there I found myself, outside the old UCD bar as we shared a picnic bench and drank lunchtime pints of Smithwicks in June 1990. We had just come from an exam board meeting in the history department where I had been called in to meet the internal and external examiners after performing well in my first-year history exams.

Given that the Republic’s team had never taken part in a soccer World Cup, I suppose it was fitting that historians were talking about this Irish sporting milestone. Not that either of us knew much about soccer, but expertise in that matter was hardly a requirement when it came to the summer of 1990. Loquaciousness on sport and its engendering of a sense of national solidarity and confidence, not to mention delirium, became all the rage, as did debate on whether controversial pundit Eamon Dunphy was traitor or truth teller (we agreed he was a truth teller).

But we also talked about many other matters that day, a reminder that were various things going on around, over, under and through the soccer. Ireland in 1990 was a place somewhat in transition. We conversed, for example, about Mary Robinson, and here, our paths diverged. The previous month, Robinson’s candidacy for the presidency had been launched; she was an Independent candidate supported by the Labour Party and declared she was “looking forward to being a president for all the people, and that means for many who are under-represented or who have not got a voice in our very unequal society”.

As an 18-year-old, docs and denim clad and with a pierced ear, I made enthusiastic noises about this idea of a more active presidency with an edge. Fanning, then aged 49 (ancient as far as his teenage liquid lunch companion was concerned), in three-piece suit and behind large professorial glasses, looked askance and scoffed: “what is the point in running for an office that doesn’t exist”? I’m sure Fanning knew a lot more about the Irish Constitution than I did, but I told him I was glad the first election I would be able to vote in later that year would offer me a chance to mark the box that would give the political two fingers to what I regarded as the (and his) conservative establishment.

Robinson at that stage was regarded as a rank outsider. The presidency historically had been a prize to be fought over by the political establishment – Fianna Fáil and Fine Gael – who between them had won 74 per cent of the vote in the previous year’s general election, and someone with Robinson’s track record of championing causes perceived as radical was hardly going to threaten that. And yet, her candidacy was a reminder there were some political stirrings suggesting the 1990s might not be business as usual; feminist TD Fine Gael’s Monica Barnes was to warn that year against “male commentators throwing cold water on the idea of the women’s vote”.

The political establishment was also getting to grips with greater fracturing; Fianna Fáil under Charles Haughey had been compelled to accept a coalition with Des O’Malley’s Progressive Democrats the previous year, diluting Fianna Fáil’s traditional “core value” of single-party government. Some on the left were struggling to make sense of the implications of the momentous events in 1989 with the collapse of the Berlin Wall. As president of the Workers Party in April 1990, Proinsias de Rossa settled on this analysis: “History has dealt a mortal blow to those who gave blind, uncritical support to the eastern bloc. It is a valid criticism of my party that we did not more publicly criticise the defects we saw. But socialism is not dead . . . Stalinism is dead.”

Whether Ireland was ready or willing to embrace greater social and sexual liberalisation was also contested. Amusingly, in March 1990, Catholic Bishop of Clogher Dr Joseph Duffy, as spokesman for the Catholic hierarchy, had said, “we don’t ignore the reality of condoms, but condoms in their proper place”. I and many of my fellow students had a very different sense than Dr Duffy of what constituted the proper place for a condom in 1990, but those young lovers seeking safe sex to celebrate Irish soccer performances in the bed as well as in the pub faced significant obstacles. The month prior to the World Cup, Richard Branson, as chairman of Virgin Megastore, reacted with fury to the conviction of the Irish Family Planning Association for selling condoms at his Dublin store. “The Irish government hold the EC [European Community] presidency and are a modern western democracy, but they appear to be treating their citizens with the same disregard as Ceausescu did in Romania, ” he said.

Branson was never one for understatement.

At least the church authorities got in to the swing of World Cup good humour. When asked at the end of June what Irish soccer fans would need from their spouses on returning home from their longer than expected voyage, Dr Michael O’Doherty of the Catholic Marriage Advisory Council replied: “Reconciliation, tender loving care and cash.”

Ireland’s presidency of the EC was also a reminder of the wider international context in 1990. As taoiseach, Charles Haughey had overseen meticulous preparations for this including a major refurbishment of Government Buildings on Merrion Square, dubbed “the Chas Mahal” by Dublin wits well used to his extraordinary vanity. But there was also important business to be done during this presidency, given the political convulsions in Europe the previous year. Haughey played an important role in securing European acceptance of German reunification despite the reluctance of Britain, and the wavering of France, and he also oversaw the establishment of an intergovernmental conference on political union. German Chancellor Helmut Kohl was duly impressed and the reward came in the form of increased European funding for Ireland.

But whatever about new departures and new eras, the dark and bloody backdrop of the Troubles endured, with 81 people killed in 1990. Fr Denis Faul, the Dungannon priest and vocal critic of violence and the IRA, said in April: “The Catholic people in Northern Ireland, in the ghetto areas, live in state of fear. They are in fear of the forces of law and order, and they are in greater fear of the IRA”. The following month John Stevens, the Cambridgeshire deputy chief constable who authored a report on collusion between Northern Ireland security forces and loyalist paramilitaries, asserted that leakage of information “was restricted to a small number of members of the security forces and is neither widespread nor institutionalised”, which he later acknowledged was a gross underestimation. He was much obstructed in his work, which would continue for another 14 years. And this as British prime minister Margaret Thatcher decried the decision of the Irish Supreme Court in March not to extradite two republican prisoners to Northern Ireland because of alleged risk to their lives. The realisation of the hope enunciated in Seamus Heaney’s The Cure at Troy, written in 1990 and produced by the Field Day Theatre Company, was still some years off:

But then, once in a lifetime
The longed-for tidal wave
Of justice can rise up
And hope and history rhyme

There were, however, moves afoot behind the scenes to create conditions conducive to bringing the conflict to an end, including secret dialogue between the British government and the IRA army council; it was no coincidence that later in 1990 then Northern secretary Peter Brooke could say “the British government has no selfish, strategic or economic interest in Northern Ireland”.

While the Irish economy had begun to grow, an unemployment rate of 12.9 per cent in 1990 was a reminder of the challenges that remained. Emigration rates were going in the right direction – in 1989 70,600 emigrated, which fell to 56,000 in 1990 – but the country remained scarred by the scale of the forced exodus the previous decade, amounting to some 450,000 people (“nobody gives a s**t about them”, Mary Robinson was to declare controversially in a Hot Press interview later in 1990). A large number of Irish soccer fans watched the Italia ’90 games not in Ireland or Italy, but England.

As for the soundtrack of 1990, the World Cup generated some dreadful dirges, including Give It A Lash Jack and Put ’Em Under Pressure. But the true musical sound of 1990 was Sinéad O’Connor’s sublime version of the Prince song Nothing Compares 2 U. O’Connor was moved that year to persuade people of her softness: those, she said, who assumed she was “aggressive and strong and tough” because she was “a woman with short hair and a pair of Doc Marten boots” could rest assured she was actually “a good person” with “tender feelings”.

But O’Connor that summer made it clear that with her unique and powerful voice she could also rattle cages, announcing she would not perform at a New Jersey concert if the Star Spangled Banner was played: “I don’t want to go on stage after the anthem of a country that’s arresting people, harassing people, for expressing themselves on stage”.

Frank Sinatra, paragon of virtue that he wasn’t, announced in response: “I wish I could get her so I could kick her ass.”

Just, as I’m sure, Prof Fanning wanted to kick mine.

1 Rory McIlroy: Maybe I’m just not as good as I used to be
2 Ken Early: PSG would be sensible final move for Ronaldo
3 My sporting disappointment: Jimmy White and the elusive World Championship
4 The Offload: Joe Schmidt the influencer is due a second act
5 World Rugby push back on extending residency rule
Real news has value SUBSCRIBE
Crossword Get access to over 6,000 interactive crosswords