Q&A: There may not have been many goals but dramatic moments were in abundance 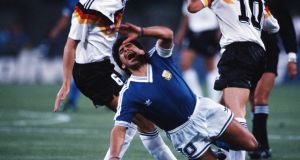 Oh, come on, everybody remembers Italia 90.
Do they, though?

Well, not all of it, obviously.
Go on then, what do you remember?

Oh, and Nessun Dorma.
Anything else?

What else is there?
Ooh boy. So, so much. Italia 90 is nothing less than the pivotal World Cup of modern times.

Ah here.
No, really. We tend to think of Italia 90 as a watershed moment in Irish life – and it is. But it was a World Cup for 23 other countries too and most of them came home with a story to tell.

What kind of stories?
Well, we only have to start on the opening day. Cameroon beat holders Argentina – Maradona and all – in the opening game. It’s hard to overstate what a shock this was. African teams had only won three games in 60 years up to then. Francois Omam-Biyik scored and the rest of the team kicked Argentina off the park.

Argentina underestimated the underdogs?
Yeah, and they weren’t the only ones.

No?
No. The next day, Romania beat the Soviet Union, who had been runners-up in the Euros two years previously. But that was only a minor tremor compared to the following day, when Scotland lost to Costa Rica.

Oh hang on, that rings a bell alright. One of those World Cup games where Scotland went in as big favourites and proceeded to Spud Murphy the bed?
A classic of the genre, yes.

Okay. So there was the odd shock here and there. But wasn’t the football famously terrible?
Well, you say that. But do yourself a favour sometime and google The Goals of Italia 90. Branco setting up Careca for a silky round-the-keeper move against Sweden. Lothar Matthäus in his absolute pomp against Yugoslavia. Jurgen Klinsmann with the diving header to end all diving headers in the same game. Roberto Baggio’s immaculate zig-zag-cum-stepover against Czechoslovakia. And these were all in the group stage.

So why does it get such a bad rap?
A few reasons. For one thing, some of it was undeniably thuggish. Maradona was fouled 53 times in seven games. In Brazil in 2014, Lionel Messi was fouled 18 times. Italia 90 was the last World Cup where you could brutalise the opposition with relative impunity. Argentina had the first ever player sent off in a World Cup final and duly followed up with the second as well before full-time.

But wasn’t the football dull as well?
You could make that argument, certainly. It carries to this day the stink of having the lowest goal average of any World Cup, at 2.21 goals per game. And it presaged two major changes to the game itself. Within a few weeks of the final, Fifa changed the offside rule to make the attacker onside if he was level with the last defender. And a couple of years later, the backpass rule came in. Partly, it was said, because of Packie Bonner.

Eh?
Apparently analysis of the irrefutably dire Ireland v Egypt match found that Donegal’s finest had held the ball in his hands for a total of six full minutes of the 90. This was used as evidence to back up the need for a rule change and by 1992, keepers couldn’t pick up a backpass. “It killed my career,” Packie later admitted.

So hang on. Italia 90 had the lowest goal average and led to two rule changes to open up the game. How can you argue it was anything other than boring?
Look, say it was terrible. Say it was ugly. Say it was defensive and unattractive and functional. But the one thing Italia 90 absolutely was not was boring. Of the 15 games in the knock-out stages, only two were decided by more than one goal. Seven went to extra-time, four went to penalties – including both semi-finals. And because of the gimmicky way the draw panned out, there were heavyweight clashes everywhere you looked.

How so?
Argentina ended up playing Brazil even though they had the same record as Colombia. It was Maradona’s best moment in the tournament, a scintillating run and set-up for Claudio Caniggia’s winner. And Holland played West Germany only because they lost a coin toss to Ireland. A broiling, spiteful game that ended 2-1 to the Germans, it’s best remembered for Frank Rijkaard spitting at Rudi Völler. We got Romania, they got the eventual champions.

Lucky us.
This is the thing we never really talk about. Ireland were the poxiest poxbottles who ever poxed. We were never ahead in a game. We were only the second team ever to make the quarter-finals without winning a match – Sweden got there due to a walkover in 1938. Of the other 23 teams, only Egypt and South Korea scored fewer goals than us. And yet we were still there, eight days short of the final.

Until Toto finished us off.
Indeed. Schillaci is such a weird story when you think about it. He scored seven goals in his Italy career – six of them in the space of a golden month in 1990. He won the Golden Boot, the Golden Ball, and came second in the Ballon d’Or. And his international career only lasted another 15 months.

He got to do a Smithwicks ad, all the same.
See? Italia 90 worked in mysterious ways.

The Germans won, of course.
They did. One of the best World Cup winners, whatever way you spin it. Their semi-final against England was mesmerising drama, right up to Chris Waddle’s skied penalty. Andy Brehme scored the winner in the final and they had Matthäus, Völler, Klinsmann, Thomas Häßler and Jürgen Kohler. Iconic jerseys too.

So it wasn’t all about us?
Nah, it was mostly about us. Isn’t everything?

1 Bundini Brown: The man who invented ‘float like a butterfly, sting like a bee’
2 Worst sporting moment: White knuckle ride on a hate-filled night at Windsor
3 Heroic insanity: When Michael Dunlop raced home in memory of his father
4 Sonia O’Sullivan: Russian Affair lays bare one of sport’s greatest scandals
5 Australia in pole position to secure 2027 Rugby World Cup
Real news has value SUBSCRIBE
Crossword Get access to over 6,000 interactive crosswords