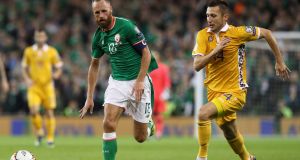 Republic of Ireland captain David Meyler in action during the World Cup qualifier against Moldova at the Aviva Stadium. Photograph: Brian Lawless/PA Wire

David Meyler has promised that the Republic of Ireland will give it “a hell of a go” as they attempt to leapfrog Wales and keep their World Cup hopes alive.

The Serbs, who lead the Welsh by a point and are a further point better off than the Irish, are assured of a top-two finish, but all three sides could yet qualify automatically and Wales and Ireland could miss out all together with only eight of the nine runners-up earning playoff berths.

Speaking minutes after the final whistle in Dublin and having just learned of Serbia’s defeat, Meyler said: “I literally just heard that a minute ago.

“I just want to focus on Monday now that tonight’s game is out of the way. We’ll get up tomorrow, start watching the Wales game and prepare for Monday.

“We’ll get in tomorrow morning, prepare for Wales and give it a hell of a go.”

Handed the armband in the absence of injured duo Séamus Coleman and Jonathan Walters, Hull midfielder Meyler led Ireland to a victory which may have been largely incidental to the bigger picture after a week of talk about what impact Gareth Bale’s absence might have on Wales.

The 28-year-old said: “It’s a sticky one because in the press, you’re talking about the Wales game and everybody expects us to walk over Moldova. But they’re a good team, they’re no mugs.

“They are professional footballers and at times, they caused us a problem in the middle. But they never really looked threatening.

“They had a couple of long-distance shots, but I felt we were comfortable and we dealt with everything.

“It’s nice for the lads to get minutes and us to get the victory. The confidence will do us the world of good going into Monday.”

Manager Martin O’Neill adopted a more adventurous approach from the off, pairing Daryl Murphy and Shane Long in attack and asking Wes Hoolahan and 22-year-old Callum O’Dowda, making a first competitive start for his country, to provide the ammunition.

The ploy paid of swiftly and handsomely as 34-year-old Murphy poked home a second-minute opener and then helped himself to a second with an expertly-directed header with just 20 minutes gone, and that proved enough to send his side to Cardiff with everything still to play for.

Meyler said: “It’s always nice to see someone score at club level and international level. He deserved his two goals and deserved man of the match.”

It was a big night too for Meyler as he led his country out, although he insisted collective rather than individual achievements were the priority.

He said: “It’s a huge honour for me and my family, but it’s more important that we got the three points and won the game. Now we have it all to play for on Monday against Wales.”