Ireland 2 Moldova 0: What we learned

All roads now lead to Cardiff, but what did win in Dublin teach us? 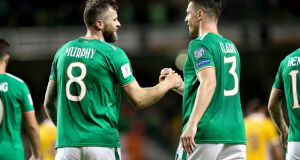 Daryl Murphy came into this fixture as Ireland’s most prolific striker, and his six goals in 11 games for Nottingham Forest meant his selection was more than warranted. And he justified Martin O’Neill’s decision to play two up front almost immediately, reacting well to turn home the opener after just two minutes. He had a second in the 19th minute, as he met Stephen Ward’s cross from the left with a precise header back across goal and into the far corner. Murphy’s first goal was a display of sheer instinct inside the box, the second an example of good old-fashioned centre-forward play. Both had the mark of a man in form and with complete faith in his ability - emphasising how sometimes it’s better to pick on form rather than reputation.

The nadir of Ireland’s qualification campaign - so far - came in Tbilisi, as O’Neill’s men huffed and puffed their way to an insipid 1-1 draw with Georgia. A feature of Ireland’s lacklustre performance that night was their rudderless midfield, which offered little protection to the back four and struggled to retain the ball. David Meyler came in for the defeat to Serbia days later and was Ireland’s man of the match - and he picked up where he left off against Moldova. Meyler was an assured presence in front of his defence, reading and screening excellently, with his short, crisp passing keeping Ireland ticking over. He is a far more dynamic presence than Glenn Whelan and James McCarthy, and brings a higher tempo to proceedings, which has often been lacking. He has found himself filling in various positions during his international career, but might have finally landed on the right one.

Shane Long desperately needs to end his drought sooner rather than later. The Southampton striker has yet to score this season, and he is now 23 games without a goal. His last for Ireland came in the 3-1 win in Chisinau a year ago, and he spurned a number of good chances in the return fixture on tonight. In fairness to Long, Ireland’s style means he often spends the majority of games haring after lost causes with next to no support - and it’s a role he fills admirably. Even at his best Long has never been prolific, and he is picked on qualities other than his goalscoring - but it will grate on him that he couldn’t end his run against the Moldovans. It will come, though, especially if going forward O’Neill continues to partner him and Murphy.

There are some games when possession will be at a premium and Ireland will need to rely on physicality and set piece prowess in order to be competitive. There are others, however, when they come across sides like Moldova and find themselves enjoying the lion’s share of the ball. This fixture fitted into the latter category, and it was a game made for Hoolahan. With little pressure on Ireland’s midfield, Hoolahan was able to drop deep at will, pick up the ball off Meyler and look for the killer pass. And he found one spectacular one - his ball to Stephen Ward on the left wing led to Murphy’s second goal, which effectively ended the game as a contest. O’Neill is right to use Hoolahan sparingly - especially given he is now 34-years-old - but on nights when Ireland can expect to dominate he should be one of the first names on the team sheet.

Monday night’s clash with Wales was red-inked as soon as the Group D fixtures were released. Nobody had any real idea what the state of play would be - but it always felt likely the final game of the campaign in Cardiff would be of genuine significance. And so it has transpired that the game at the Cardiff City Stadium is a straight shootout for second place in the group, and a potential place in the play-offs. Ireland head into the fixture trailing Wales by a point, and are three goals worse off on goal difference. It’s win or bust for O’Neill’s men - but even then, three points might not be enough for either side to clinch a playoff place. As much as the Irish camp have looked to downplay it, their hand is clearly strengthened by the absence of Gareth Bale - the one genuine superstar either side possesses. Victory in the Welsh capital - whether it results in a playoff place or not - would provide a rousing end to the campaign, and allow the FAI to feel some justification in handing O’Neill a contract extension.