‘I found out my contract hadn’t been extended through the press officer,’ he said 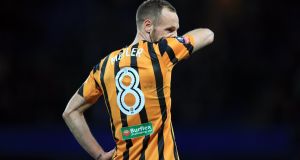 David Meyler has said that he was disappointed with how Hull City handled his departure from the club. Photo: Getty Images

Republic of Ireland international David Meyler says he is disappointed by the manner of his departure from Hull City after five and a half years.

The midfielder said that the club showed him a lack of respect after deciding they would not extend his contract on the same terms.

The 29 year-old says that the club was good to him when he needed time to be with his family before Christmas but the Corkman says he was then surprised that it wanted him to extend his contract on reduced terms.

“There was a lot went on,” he says, “outside of football, at home. My wife had a miscarriage and I needed time away from the club, I needed a couple of days, so that was difficult – that was just after the Wales game – but I had that time, the club were very good to me.

“When it came time to my contract extension, the club chose not to give me the contract that I was on. They wanted to negotiate a new contract. The manner in which it was dealt with was disappointing. I felt that with my service there, the time and what I had achieved there – the club talked about respect but I thought I probably wasn’t shown the respect that I deserved.

“I found out my contract hadn’t been extended through the press officer, which probably isn’t ideal. Did I think too much or did I think too little about it? I don’t know. But once I came around I probably realised: ‘I’ve been here too long, I’ve achieved all that I can; it’s probably gotten stale’.

“The final season was tough, especially with the turnaround in players. If you look, different clubs were keeping players but adding to them; we were having turnovers of 10 or 11 players every season which was just too difficult and that’s why we struggled last year. There were too many new faces, we couldn’t get together; that’s why towards the end we managed to string a few good results together, because we were more familiar but it was probably six or seven months too late.

“If you look now, I’ve left with two or three others and there are probably another four out of contract who will probably end up leaving as well. That’s difficult because you need stability in football clubs and that wasn’t the case.”

He has, he says, offers to mull over with his family when he gets home in the wake of Saturday’s game and says he is relaxed about his next move but insists the potential to enjoy some success will be a key factor in his deliberations.

“Obviously it’s nice to earn a few quid but I want to achieve something,” he says. “I want to look back on career and be successful. I’ve been lucky enough to have played for Ireland. I won promotion from the championship. Played in an FA Cup final... yeah we lost but four years on that was huge for a club the size of Hull.

“Matt (Doherty) here will look back on winning the Championship for the rest of his life, it will always be a great time in his career; he was successful, part of a great team, a great bunch of players, that’s what you remember. You want to be ambitious. I want to go to a club that wants to win.”

Asked if he feels that he is still has something to offer on the international front in the run up to Saturday’s game, effectively a send-off for John O’Shea, Meyler looked bemused.