Jose Mourinho says Paul Pogba will be out for extended period 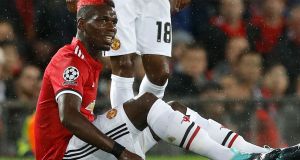 José Mourinho has confirmed that Paul Pogba will be out of action for Manchester United for an extended period as he recovers from a “long-term” hamstring injury.

The severity of the issue that caused the 24-year-old to limp off early in the club’s Champions League return against Basel has been shrouded in mystery. Mourinho repeatedly claimed not to know how bad Pogba’s injury was as the club continued to assess him in-house, as well as seeking specialist advice.

The United manager is still unwilling to put a timescale on the injury but 17 days on from the France international’s setback he has revealed his concerns over the player’s absence.

“He’s injured, he cannot play [against Crystal Palace] and it’s not an injury that I can have the hope like I have with Antonio Valencia or Phil Jones,” said Mourinho, who on Friday discovered he has been summoned to appear in a Madrid court on November 3rd for alleged tax evasion.

“I have the hope to see them in training and to have a positive answer, so long-term injuries – I don’t speak about them. So Ibra [Zlatan Ibrahimovic] and Pogba and Marcos Rojo, these players I don’t think about them.”

Pogba, Rojo and Ibrahimovic are joined on the sidelines before the visit of Palace by Michael Carrick, while Jones and Valencia are to be assessed having missed the midweek Champions League match at CSKA Moscow. Marouane Fellaini also missed out with an ankle injury that is still under assessment, while Anthony Martial went off in the 4-1 win.

“We have to train and to make decisions after training but I hope some of the players that couldn’t play in Moscow [can play],” Mourinho said. “I hope maybe not all of them but some can recover. What I am saying is that from all the injuries we have, I hope we can have some players available tomorrow.”

Mourinho’s court appearance will come two days before United face Chelsea, the Portuguese’s former club, at Stamford Bridge in the Premier League and is the result of a case opened by Spanish authorities against the 54-year-old in June and relating to his time in charge of Real Madrid.

It is claimed Mourinho did not declare revenue linked to his image rights in 2011 and 2012 and owes the Spanish state nearly €2.9 million. Mourinho’s agent issued a statement at the time that denied the allegation and pointed out he paid nearly €23 million in taxes during his stint in Spain. It is also stated that he had reached a settlement with the Spanish taxman in 2013.