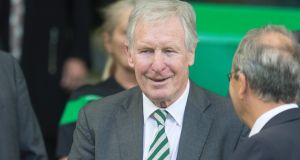 Celtic have announced the death of former captain Billy McNeill at the age of 79. Photograph: PA

Former Celtic captain Billy McNeill, who helped the Scottish giants win the European Cup in 1967, has died at the age of 79, the club said on Tuesday.

He became the first British man to lift the European Cup in 1967, after he captained Celtic’s ‘Lisbon Lions’ to a 2-1 victory over Inter Milan in the final.

“It is with great sadness that we announce the death of our father Billy McNeill,” his family said in a statement released on Celtic’s website.

“He passed away late last night (Monday) surrounded by his family and loved ones. He suffered from dementia for a number of years and fought bravely to the end, showing the strength and fortitude he always has done throughout his life.”

McNeill captained Celtic in the late 1960s and early 70s under the stewardship of Jock Stein. He reached another European Cup final in 1970, as well as two semi-finals in 1972 and 1974.

“The Celtic family is mourning the death of Billy McNeill, the club’s greatest ever captain and one of the finest men to have played and managed the Hoops,” Celtic said in a statement.

“Celtic Football Club’s deepest condolences and heartfelt prayers go to Billy’s wife, Liz, their children, Susan, Paula, Libby, Carol and Martyn, grandchildren and all his many family and friends at this extremely sad time.”