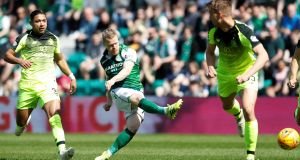 Celtic’s journey towards their eighth successive Scottish Premiership title stalled against Hibernian in a goalless draw at Easter Road.

Hibs keeper Ofir Marciano made several key saves during an open game which was far from one-sided, although often short on quality.

The league leaders moved nine points ahead of Rangers with four games remaining, the first of which is at home to Kilmarnock next week.

Celtic have not lost in nine games since former Hibs boss Neil Lennon took over until the end of the season in February after the sudden departure of Brendan Rodgers to Leicester, although they still have a bit more work to do to secure the title.

It was another fine result for Paul Heckingbottom, who replaced Lennon in the Hibs hot seat in February and has yet to lose in nine league games — although Celtic knocked them out of the William Hill Scottish Cup last month.

Heckingbottom’s side went into the game buoyed by their win over Edinburgh rivals Hearts in their last outing.

Lennon, meanwhile, brought back French midfielder Olivier Ntcham for Ryan Christie, out for the rest of the season after surgery on multiple facial fractures.

Honduras left-back Emilio Izaguirre came in for Kieran Tierney, absent from the Hoops squad with an ongoing hip and pelvic problem.

In the 10th minute French striker Odsonne Edouard’s shot on the turn from a James Forrest cross sped wide of the target.

However, Hibs kept pressing and defender Paul Hanlon scooped a shot high over the bar from 12 yards with the Parkhead defence again looking uneasy.

In the 25th minute, as play swung from end to end but with the visitors gaining more of a foothold, Marciano stretched to tip Ntcham’s curling shot from the edge of the box over the bar for a corner which came to nothing, before he easily saved a header from Parkhead defender Mikael Lustig.

Celtic ended the first half on top but it was stalemate after the interval as both sides battled for the upper hand.

Lennon replaced the woefully out of touch Ntcham with Australia international Tom Rogic on the hour mark.

The Hoops came close in the 65th minute, after Celtic’s Irish winger Jonny Hayes was brought down by Hanlon just outside the box.

Edouard’s free-kick was heading for the top corner until Marciano brilliantly knocked it away from danger.

Then the Hoops striker seemed to be deceived by Forrest’s cross from the right and knocked it over the bar from six yards.

Rogic drove inches wide before Edouard ran through to round Marciano and put the ball in the net but the offside flag was up.

The closing stages saw both sides exert themselves in search of the winner.

Bain had to foil a close-range attempt from Hibs substitute Oli Shaw, on for Florian Kamberi, before Marciano made further important saves from Edouard and Jozo Simunovic as the Parkhead men pushed for a late winner.