State will restore support in deal being discussed by Government, FAI lenders, Uefa 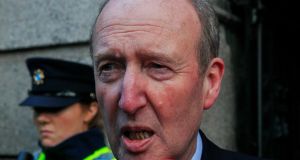 Minister for Sport Shane Ross. “We are encouraged by the willingness of all parties and the determination of all parties to reach a solution which avoids examinership or liquidation.”Photograph: Gareth Chaney/Collins

The Government is prepared to pay up to €5 million per year as part of an emerging deal to safeguard the future of Irish football and the Football Association of Ireland (FAI).

Sources confirmed that the State was prepared to restore its grant support of €2.7million and “augment” it up to a level of €5 million as part of a wider agreement being discussed by the Government, the FAI’s lenders and Uefa, European football’s governing body.

The figure emerged following extensive talks this week between the three parties and the FAI itself.

Sources said there was a “change of attitude and dynamic” at the talks following the appointment last week of three independent directors at the FAI, including a new independent chairman.

Strict conditionality is likely to be attached to any increased financial support.

The increased funding level would be earmarked for support for specific sectors of the game, most obviously grassroots, with Minister for Sport Shane Ross and his deputy Brendan Griffin anxious that the money be seen to support football in communities around the country.

Further corporate governance reforms are also to be sought.

It is hoped that a more concrete framework for a deal will be agreed in the next 10 days, with contacts expected to continue between all parties.

Sources present at talks in recent days said an acceptance emerged that all parties would have to make a contribution of some form.

It is not clear if that will entail a debt writedown by the FAI’s bankers, Bank of Ireland, although it is envisaged that a discussion around the sustainability of the FAI’s debts is inevitable.

In a statement Bank of Ireland said it had a “very constructive” meeting with the Minister. “Our approach is always to work with any customer facing a challenge to reach a sustainable solution, and that’s an aim that we share with all parties in this matter.”

Mr Ross said on Wednesday night that “following our meeting with Bank of Ireland and trade unions today we are encouraged by the willingness of all parties and the determination of all parties to reach a solution which avoids examinership or liquidation”.

Having met with the bank, Mr Ross briefed other “stakeholders”, including Siptu, which represents development officers and some other staff at the association, and briefed them on the situation.

The union’s official, Denis Hynes, said afterwards that he was happy things were moving “in the right direction”, and suggested that while job losses still seemed to be on the cards there was a strong sense that the number being envisaged was much smaller than before.

“We’re a long way down the road towards a plan that will minimise job losses and the damage that would go with them” he said, “but there will be a restructuring.”

Mr Hynes also said that he expected the association to set out how it planned to proceed at a meeting between the two sides “within the next couple of weeks”.

As he had done on Tuesday outside the Dáil, Mr Ross told those who attended the meeting that the association was working on a new plan which he hoped would be brought back to Government within that same timeframe, and he confirmed that the appointment of interim chief executive was also expected soon.

Addressing concerns of those involved in the SSE Airtricity League, he said that Uefa had provided assurances that even in the now increasingly unlikely event that the association was to go into either examinership or liquidation, there were contingency plans to maintain the running of the league and the continued involvement of its clubs in European competition, with umbrella bodies European Leagues and the European Club Association both lined up to play a role.

Stephen McGuinness, general secretary of the Irish players’ union, the Professional Footballers’ Association of Ireland, said Mr Ross, Mr Griffin and the other officials present had made it clear that they saw the league’s fortunes as key to the Irish game’s future health, and that it was one of the specific sectors of the game that the Government was intent on supporting.

One potential source of tension, however, could be Mr Ross’s demands that further reforms be made to the FAI’s council.

Mr Ross said last night that the Government “is prepared to play its role in contributing, but only under strict conditions which include the review of the powers and position of the FAI council, and the basic principle that there will not be a reward for wrongdoing”.

There is thought to be frustration in the FAI surrounding these demands given commitments it has already made to improve corporate governance.

1 Andy Farrell ticking all the boxes in advance of England showdown
2 Ireland wary of Peyper calling the tune as they head for Twickenham
3 Owen Doyle: Day of the jackal may be coming to an end
4 David Brady says he's witnessed illegal payments of GAA managers
5 Players impressed with Bono’s Irish pride and desire
Real news has value SUBSCRIBE
Crossword Get access to over 6,000 interactive crosswords