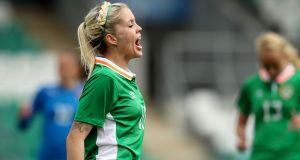 The Republic of Ireland women’s team delivered an excellent away performance in Slovakia to make it two wins from two games in their 2019 World Cup qualifying campaign.

First-half goals from Denise O’Sullivan and skipper Katie McCabe sealed an impressive 2-0 victory which sees Ireland claim maximum points ahead of next month’s trip to the Netherlands to face the European Champions.

Ireland opened their qualifying campaign with a convincing win over their Northern neighbours last month, and while they were due a tougher test from Slovakia, there could be no margin for error against nations ranked lower than them.

Slovakia dominated much of the ball throughout the game but Ireland were able to make much better use of their possession. It took only eight minutes for Bell’s team to score via their first attack of the game.

After a defensive error, Megan Campbell’s long throw caught Slovakia off-guard and Katie McCabe squared for Denise O’Sullivan to tuck the ball home from six-yards out.

Just past the half-hour, Ireland established a two-goal lead with another well-worked goal. Substitute Sophie Perry found space down the right to cross for Amber Barrett who touched the ball back for skipper Katie McCabe and McCabe’s low, deflected finish found the bottom corner.

The home side continued to dominate the ball after the break but Ireland’s excellent defensive display ensured a clean sheet for Manchester City goalkeeper Marie Hourihan. Ten minutes from time, Ireland should have scored a third when substitute Ruesha Littlejohn was held back in the area but keeper Maria Korenciova got down well to deny the Celtic striker from the resultant spot kick.

After the match Bell said: “I’m very proud of the performance. The two moments of quality got us the goals but it was our hard work throughout the 95 minutes which got us the points tonight.

“It was always going to be a physical test for us but I thought we stood upto it brilliantly. You look across the entire game and they haven’t had a single goal-scoring opportunity and those defensive foundations are virtually important.

“It’s a great start to the campaign with the two wins over Slovakia and Northern Ireland so now we look to the Netherlands game next month and take that confidence into that game. It will be another tough game but we’ll look at it and try and come up with another winning strategy.”