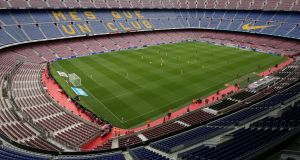 By midday Spanish time yesterday, everyone following the images from Catalonia could see that the violence of the Spanish police in attempting to suppress the Catalan independence referendum had created a truly extraordinary situation.

Everyone, that is, except Spain’s Professional Football League (LFP), who refused FC Barcelona’s request to postpone their home match against Las Palmas. Barcelona had to play or they would forfeit the game and be docked another three points for failing to fulfil the fixture: an effective six-point penalty that the majority of Barcelona’s board decided they could not accept.

There were those on the board who felt it was wrong to agree to play: vice-president Carles Vilarrubí and director Jordi Mones resigned, while ex-president Joan Laporta insisted that it wouldn’t have happened this way on his watch. “Playing the game behind closed doors is to be an accomplice of those who impede the peaceful exercise of democratic rights and freedoms,” he posted on Twitter.

Laporta has always been an outspoken advocate of Catalan independence and perhaps he was quicker than Bartomeu to grasp the propaganda potential of Barcelona being hit with a flagrantly unjust six-point penalty from the league head office in Madrid. Laporta and others saw the fact that the match went ahead as a reproach to the huge “Mes Que Un Club” slogan emblazoned on the vacant seats that loomed over the pitch.

The resignations were another humiliating moment for Bartomeu: this president is arguably even more unpopular than his predecessor, Sandro Rosell, who is currently in jail awaiting trial on charges of money laundering. But the real fault lies with the intransigence of the league, who failed to understand that the situation in the city demanded a flexible official response.

The opponents, Las Palmas, had had a Spanish flag stitched into their shirts for the day, a gesture that depending on your point of view was either a gratuitous provocation, or an important reminder of the strength of loyalist feeling in other parts of the country. After such a chaotic build up and amid an eerie atmosphere, it perhaps wasn’t surprising that Barcelona took a while to hit their usual rhythm, but Sergio Busquets opened the scoring just after half-time and Lionel Messi added two more to finish the job.

Afterwards, Gerard Pique cried in the mixed zone and said he was willing to step down from the Spanish national team, if that’s what the federation in Madrid wanted. He called the police violence “one of the worst decisions by Spain in 50 years”, and it was difficult to disagree with him.

As Catalonia’s most famous institution, Barcelona has been at the centre of the growing movement for Catalan independence that has taken off in recent years. The lone-star “Estelada” independence flag was still seldom seen at the Camp Nou 15 years ago, but since the financial crisis, as the calls for independence have grown, they have proliferated in the stands to the point where the Spanish government tried (and failed in court) to ban Barcelona fans from bringing the flags to last year’s Cup final against Sevilla in Madrid. Barcelona has also been fined on several occasions by Uefa for their fans displaying the flags at Champions League matches. These efforts at repression have, naturally, only made people more determined to fly the flags.

There are a couple of reasons why the cause of Catalan separatism has never quite resounded around the world like some other national liberation struggles. One is that since so many of the nationalist grievances revolve around money – with slogans like “they rob us of €60 million a day” etc – Catalan nationalism can seem like the resentment of a rich part of a country that is annoyed at having to subsidise poorer regions. You can understand why some Catalans would get angry about perceived unfairness in the way the central government allocates resources, but the economic issues do not add up to the sort of romantic cause that stirs the hearts of outsiders.

The more important reason is that since the death of General Franco and the end of Spanish fascism, it is clearly not the case that Catalonia lives under some kind of repressive dictatorial regime. At least, that’s how it looked until yesterday. The government of Mariano Rajoy had always insisted the Catalan vote had no legal standing, but rather than simply allow it to take place and fight it through the courts, they chose to beat it down on the streets with maximum brutality and stupidity. “They have separated Catalonia and Spain more, and there will be consequences,” said Pique. The violent images will have created a whole new generation of Catalan nationalists, both in Spain and everywhere else.