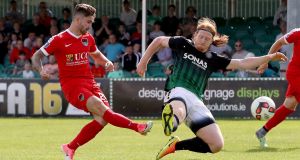 Having scored their winner on the opening day of the season, Sean Maguire was fittingly on the mark in his final domestic match for Cork City ahead of his move to Preston North End.

Victory at a sun-drenched Carlisle Grounds moves John Caulfield’s side back 15-points clear at the top of the Premier Division table with a game in hand.

Maguire made amends for an early miss by scoring his 20th league goal of the season on 13 minutes, to equal the record for a Premier Division season by a City player.

“I’m happy in one way to equal the club record with 20 goals, but a bit gutted in another way to not beat it from hitting the post,” said Maguire who plays his final game for the club in their Europa League return at AEK Larnaca this week.

“But the result is all that matters, we’re back to winning ways and hopefully we can put on a big show next Thursday.”

The striker started the move for his goal with a diagonal ball to Karl Sheppard who pulled it back for Steven Beattie to cross for Maguire to power a firm header past Peter Cherrie.

Second best in the first half, Bray were far better from the restart, with Aaron Greene racing clear onto Ryan Brennan’s pass only to shoot into the side-netting.

But the frame of their goal, and Cherrie, prevented Bray falling further behind on 63 minutes.

Maguire’s guile and pace got him past two defenders before his shot came back off a post. Substitute Achille Campion’s follow-up was tipped over by Cherrie.

An error by Bray captain Kenna was then clinically punished as Cork doubled their winning margin on 86 minutes.

The mishit clearance ran for Maguire who crossed to the far post where Jimmy Keohane arrived to side-foot to the net.

Bray stay third with manager Harry Kenny stating afterwards that he’s hopeful the guarantee his players - who collectively put themselves on the transfer list last week - have sought on the club’s viability for the rest of the season will be forthcoming this week.

“The investment is there according to the directors of the club,” said Kenny.

“The lads are just looking for a guarantee on that.

“I’m hoping that might materialise this week. I’m very optimistic. I’m told that it’s there.”