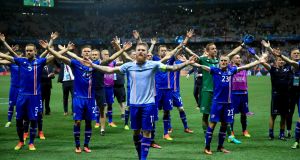 The continent watched in awe on Monday night as players and fans alike from 330,000 person Iceland celebrated their last-16 victory over England - combining to perform the seismic ‘Huh’.

Iceland’s thunder-clap may fit the mould of an old Viking war cry - but it is in fact a celebration with Scottish roots. Inspired by the fans of Motherwell.

Like the oars of a Gokstad ship building up to a battle-like momentum - when the synchronised clap and ‘Huh’ rise to a spine-tingling crescendo - Iceland is inspired and the opposition frozen.

According to the sports team in Icelandic newspaper Morgunblaðið though - the chant has no association whatsoever to the nation’s Viking roots. But rather the Scottish Premier League.

They explained to The Irish Times that in 2014 Icelandic side Stjarnan went on a fairytale Europa League qualifying campaign which ended in a playoff defeat to Inter Milan.

Along the way they met Motherwell, dismissing them 5-4 on aggregate. And it was during the initial 2-2 draw in Fir Park that the Icelanders were first introduced to the equally terrifying, as it is fascinating chant.

From here their mesmerised fan group - the Silver Spoons (yeah, apparently they’re from the wealthy side of Garðabær) brought the chant home and subsequently introduced it to the national team fan group for the Euro 2016 qualifying campaign.

Since then Iceland have faced the Netherlands, Turkey, Czech Republic, Portugal and England to reach the last eight of Euro 2016. The smallest country to ever compete in a major competition. They’re certainly making their presence felt. Hell, by lunchtime on Tuesday Iceland jerseys were sold out in Ireland!

Limerick’s Shane Dowling forced to retire at 27 12:43
Martina Navratilova a leader in her time, and for ours 11:59
In turmoil on and off the pitch: Where did it all go wrong for Barcelona? 11:47
Aubameyang double puts him level with Vardy in race for Golden Boot 08:43
Premier League champions Liverpool return to action; IRFU and players stalemate continues 06:56

1 In turmoil on and off the pitch: Where did it all go wrong for Barcelona?
2 Limerick’s Shane Dowling forced to retire at 27
3 Rugby impasse continues as no deal reached in fourth round of IRFU salary talks
4 College football turns blind eye to Covid-19 by risking players' health
5 The Best Of Times: Harrington stares down Garcia in epic Claret Jug battle at Carnoustie
Real news has value SUBSCRIBE
Crossword Get access to over 6,000 interactive crosswords