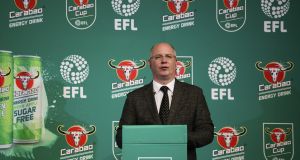 Shaun Harvey: ‘What I have agreed to do with the League of Ireland is just to provide some advice or assist on either a voluntary or consultancy basis.’ Photograph: Anusak Laowilas/NurPhoto via Getty Images

Former Leeds United and English Football League (EFL) chief executive Shaun Harvey has become the first prominent candidate from outside of the Irish game to express an interest in the top job at the FAI when the process gets under way to fill it on a permanent basis.

Harvey, who turned 50 this week, has spent most of his working life in or around the English club game and was managing director of Bradford City when the club enjoyed a couple of seasons in the Premier League 20 years ago.

From there he moved to Elland Road, after which he took over as CEO of the English Football League, which underwent a major rebrand and some significant structural changes during his time in charge. He ultimately oversaw the negotiation of a new five-year broadcast deal with Sky worth, at current exchange rates, just short of €700 million.

Despite the more than 30 per cent increase it represented on the organisation’s previous contract, some Championship clubs felt the amount secured was not enough and, amid the political battle that followed, Harvey announced in February 2019 that he would depart the role.

Since then he has been doing consultancy work within the game and, as a result of a longstanding relationship with Waterford owner Lee Power, who signed from Bradford when Harvey worked for the club, he attended the recent meeting of Airtricity League clubs intended to further explore how they might restructure the league as an independent organisation.

If the CEO role is advertised, I would apply and would be happy to take part in any process they would put forward

“What I have agreed to do with the League of Ireland is just to provide some advice or assist on either a voluntary or consultancy basis, depending on what level and frequency of support they would want,” he says.

“I would be interested in helping clubs and with the development of the league here. That’s the basis that I went over on. And if they feel that they can benefit from the input of somebody with my experience of club football and of organising a league, then I will be more than happy to continue in a role.

“In terms of the FAI,” he continues, “if the CEO role is advertised, I would apply and would be happy to take part in any process that they would like to put forward.

“I have worked at all levels of professional football in England, from League Two to the Premier League. And through the years I was at the EFL the role brought me into regular contact with the Football Association and required me to play a major part in maintaining a relationship with the Premier League. I think the skills that I have acquired and developed while working in English football would certainly be transferable to another association or competition,” he says.

Harvey accepts that he does not, as things currently stand, have an insider’s detailed knowledge of the difficulties the association has been going through, but believes that being an outsider can have its advantages too.

“From my perspective, I look at these sort sorts of issues as an opportunity to make a positive difference. One of the first things that I said to the clubs from the League of Ireland was that I’m not going to sit here and tell you how you should organise your competition. Ultimately, they are your clubs and you know what you want to do. But if you tell me what you want to achieve, I might be able to provide answers or alternative ways of achieving it.”

What the League of Ireland has, which even the EFL didn’t have, is that it is top-flight football in that country

“I have no concerns about my abilities or insights,” he continues. “How that is received by others is a question for them.”

Gary Owens is currently doing the CEO job at the FAI on an interim basis, and it not yet clear what the process will be for making a permanent appointment, or whether Owens himself will be a candidate. It has, however, been suggested that John Delaney’s long-term successor might be appointed in early autumn.

In the meantime, Harvey says he has been impressed with the collective determination of the league clubs here to improve their lot.

“Actually, what the League of Ireland has, which even the EFL didn’t have, is that it is top-flight football in that country,” he says. “To play at the highest level that you can should never be dismissed just because that level may not be as high as in some other countries.

“Ultimately, the majority of people in Ireland would want successful national teams at all levels and a successful club competition. The challenge is trying to align everyone’s interests to deliver an end product that everyone is proud of.”