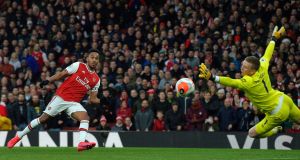 They rode their luck but, at the end of a swashbuckling encounter, Arsenal could revel in something that had eluded their season so far. This win, secured when Pierre-Emerick Aubameyang scored the last of five goals in the opening minute of the second half, was in doubt until the last second but Mikel Arteta’s side have momentum now.

It seemed some way off when Dominic Calvert-Lewin struck early on and again when, after Eddie Nketiah and Aubameyang turned the tables, Richarlison equalised. But they are now 10 games unbeaten, with three straight wins, and the head coach’s celebration at the end showed exactly what this meant: it is not improbable that they are now European contenders again. There are few certainties in football, but a nailed-on bet presented itself here: anything on offer would surely be an improvement on the dire goalless draw these sides contested four days after Christmas, both stuck in suspended animation while their newly-appointed managers watched from the Goodison Park directors’ box.

This time Arteta and Carlo Ancelotti were unmistakable presences on the touchline and, by coincidence or design, oversaw a contest that left those of either stripe gasping for breath. Arsenal’s defensive improvement under Arteta has been well noted but, on the back of three successive clean sheets, they conceded with the game 50 seconds old.

David Luiz made a hash of connecting with Gylfi Sigurdsson’s free-kick and, when the ball looped up off his shoulder, Arsenal were in trouble. Calvert-Lewin applied the punishment with a mixture of athleticism and technique, adjusting himself to execute an overhead kick from the six-yard line and, in doing so, strike the ball with the outside of his right boot so that it flew to Bernd Leno’s right.

In a see-sawing opening spell, Arsenal were on the rack. Alex Iwobi might have further dismayed his former public after a pass from Richarlison, but sidefooted over. Then Shkodran Mustafi, his hair newly peroxide blonde, made sure his defending stood out after a clearance had almost put Calvert-Lewin through. There had been enough, between those moments, to suggest Arsenal could find daylight of their own.

That it needed a substitute left-back to open the door speaks, above all, of Bukayo Saka’s prodigious talent. He had replaced Sead Kolasinac, who sustained an upper-arm injury in a challenge with Djibril Sidibe, in the 18th minute and took little time to get going. When Granit Xhaka slid a pass down the left touchline, he had a yard on Iwobi and it allowed him to deliver what is becoming one of the most reliable final balls in the Premier League.

His 10th assist of the season was met with equal elan by Nketiah, who jabbed a volley across Jordan Pickford. Everton were offering Arsenal too much space and soon fell behind. David Luiz’s distribution poses a genuine danger when he is permitted to carry the ball upfield, and one such foray brought a measured through-ball beyond a lumbering Sidibe. It freed Aubameyang, who opened his body up to curve expertly into the corner. That was all too simple, but Arsenal duly returned the favour.

Five minutes of added time had begun when Richarlison, sliding in recklessly on Dani Ceballos, was rightly booked. The Arsenal support wanted a harsher penalty and their dismay was compounded when, after Yerry Mina headed on Sigurdsson’s miscue from a half-cleared corner, Richarlison extended a leg to divert beneath an unconvincing Leno. Perhaps half-time would smooth the rough edges and dull a frenetic pace. That thought was banished within 23 seconds and, once again, both clinical finishing and standoffish defending were at play.

Leighton Baines seemed unwisely relaxed about allowing Nicolas Pépé to switch on to his favoured left foot before crossing; the Ivorian has a delivery to rival Saka and, just as he did against Newcastle last weekend, found the onrushing Aubameyang. The header, firm and downwards, was masterful but a trailing Sidibe had again been slow to smell the danger. Arsenal were, for their part, sniffing blood but were almost caught again after Richarlison, enjoying pantomime villain status, centred inches beyond Calvert-Lewin.

Shortly afterwards Ancelotti sent on André Gomes for the midfielder’s first appearance since the horror injury he sustained in November, guaranteeing Everton at least some sort of happy outcome from a game that continued to rattle on unpredictably. They almost took fresh pleasure from the score with 18 minutes left, but Leno spread himself to deny Calvert-Lewin at point-blank range after Richarlison had nodded down. The keeper than denied Richarlison with his right foot and then, in a carbon copy of the earlier incident, just failed to find Calvert-Lewin again.

Arteta had already torn a strip off David Luiz for attempting an overlapping run when all they needed was to keep things secure. Instead they kept trying to make things safe, Nketiah crashing a shot against the bar late on, and breathed a sigh of relief when Calvert-Lewin glanced Everton’s final chance wide at the death. – Guardian

George Kruis leaves the door open as he prepares to depart Saracens 06:35
TV View: Not every day a Tesco delivery disrupts a Bundesliga broadcast 06:30
Ken Early: Liverpool fans, Bamber Gascoigne and a close shave in Istanbul 06:00
As news gets better, can the pull of The Field be resisted? 06:00
From TB to polio: GAA is no stranger to disease disruptions 05:00

1 Sideline Cut: Vignette shows why Bird is the true shark in The Last Dance
2 Ken Early: Liverpool fans, Bamber Gascoigne and a close shave in Istanbul
3 O’Leary says himself and Kingdom star Galvin were the best of enemies
4 From TB to polio: GAA is no stranger to disease disruptions
5 As news gets better, can the pull of The Field be resisted?
Real news has value SUBSCRIBE