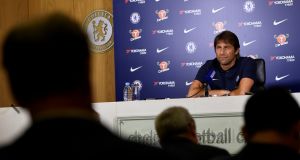 Chelsea manager Antonio Conte will be without Pedro and Victor Moses against Burnley. Tony O’Brien/Reuters

Jose Izquierdo is unlikely to receive his international clearance in time to make his Brighton bow. The winger’s move from Club Brugge is not expected to be completed in time for him to feature at the Amex Stadium, although Chris Hughton can call on new recruit Davy Propper, the midfielder signed from PSV Eindhoven. Midfielder Beram Kayal will miss the next two months with a broken leg.

Crystal Palace are expected to hand debuts to summer recruits Ruben Loftus-Cheek and Jairo Riedewald. Timothy Fosu-Mensah is also in contention for his first appearance, but Yohan Cabaye and James McArthur remain short of match fitness, and Bakary Sako is doubtful.

Wayne Rooney is set to make his first Premier League start for Everton in 13 years. Midfielders Ross Barkley and James McCarthy, whose futures have both been the subject of speculation this summer, are unavailable following groin and knee injuries respectively.

Virgil van Dijk has been ruled out of Southampton’s opener, officially due to a virus. The former Celtic star continues to agitate for a move away from the club, but has been ruled out of Saints’ first league game of the season in any case. Summer signings Mario Lemina and Jan Bednarek could make their competitive debuts for Saints as new boss Mauricio Pellegrino takes the helm for the first time in the Premier League.

Record signing Andre Gray is in line to make his Watford with Troy Deeney’s availability in question owing to recent surgery on his groin. The club captain faces a late fitness test ahead of Saturday’s visit of Liverpool but is a doubt given the procedure was only a month ago.

Liverpool will be without Philippe Coutinho and Daniel Sturridge. Coutinho, who has handed in a transfer request, is unavailable due to a back problem that also makes him a doubt for next Tuesday’s Champions League qualifying play-off first leg against Hoffenheim, while Sturridge has a thigh issue. Adam Lallana (thigh) and Nathaniel Clyne (back) are also out.
Last season: Watford 0 Liverpool 1, Liverpool 6 Watford 1
Last five league matches: Watford L L L L L; Liverpool L W D W W
Match odds: H 9-2 D 16-5 A 11-20
Referee: Anthony Taylor (Cheshire).

Gareth McAuley and James Morrison will miss out for West Brom through injury. Central defender McAuley is struggling with a thigh problem and looks like he will be absent for most of August but it is hoped midfielder Morrison will be fit for the trip to Burnley on August 19. Summer signings Jay Rodriguez, Zhang Yuning and Ahmed Hegazi are all in contention to make their debuts.

Full-back DeAndre Yedlin will miss Newcastle’s opening Premier League fixture. The United States international could be sidelined for several weeks with a hamstring problem he picked up in pre-season. Striker Dwight Gayle should be fit after his own hamstring problem and manager Rafael Benitez otherwise has only a series of minor knocks with which to contend.

Danny Rose continues his recovery from knee surgery and will miss out for Spurs. Rose, who has apologised for giving an interview criticising the club’s transfer policy on the eve of the season, is expected to be back in action in September. Erik Lamela (hips) and Kieran Trippier (ankle) are also among those missing.
Last season: No corresponding fixture
Last five league matches: Newcastle D L W W W; Tottenham Hotspur W L W W W
Match odds: H18-5 D 14-5 A 8-11
Referee: Andre Marriner (West Midlands).