Filippo Giovagnoli insists Dundalk have nothing to fear in Europa League 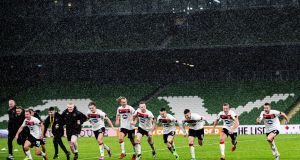 Dundalk celebrate their victory at the Aviva Stadium which earned them a spot in a Europa League group alongside Arsenal, Molde and Rapid Vienna. Photograph: Tommy Dickson/Inpho

Having already had a few opportunities to familiarise themselves with Dundalk, the people of Filippo Giovagnoli’s home town of Apecchio will get their first look at Finn Harps over the weekend when Sunday afternoon’s league game is shown on a big screen as part of the local beer and truffle festival.

They will have bigger match nights to come in the wake of a Europa League draw that has grouped the team managed by the town’s new favourite son with Arsenal, Rapid Vienna and Molde but with qualification for Uefa’s new Europa Conference League still to be sorted, the 49-year-old insists that the Harps game is more important right now than the Arsenal one. “Trust me, it is,” he says.

Giovagnoli says he is “super excited” after landing in the same group as the competition’s highest ranked side and keen to pit his wits against Mikel Arteta.

“He’s young and trying to apply his football principles the best he can,” says the amiable Italian. “He was building up in his defensive third, in his own box against Liverpool and never panicked. When I see things like that, it really inspires me. I like the kind of coach who is not afraid of nothing, I really look forward to meeting him and talking with him.”

Embarrassing the Spaniard will actually be the aim and while Giovagnoli admits it is a tall order, he is, he insists, relishing the opportunity to give it his best shot.

“I think they have better players than us, better coaches, better everything . . . of course they are better than us but that’s the challenge. You want to fill the gap in some way. How are we going to do that? Let’s see.

“We need to play with a lot of heart and run a lot and be a little bit crazy and brave but we are going to try. Listen, anything is possible. I am here, I am the proof that anything is possible in life but Finn Harps is the challenge now; I’ll think about Arsenal later.”

The manager insists that he is happy to stick with the same group of players that have got the club this far but admits that his role will only be to provide his opinion after which the owners will make their own decisions on signings and contract renewals. He seems happy enough with the demarcation and confident that he will still be about to oversee whatever squad the Americans put in place for 2021. Club chairman Bill Hulsizer on Friday evening confirmed they want him to stay on.

Recruitment may well be boosted by the €4 million the club is already guaranteed for reaching this point in the competition but every point from here on in will be worth €190,000 and with Stephen Kenny’s side having managed four in 2016, Giovagnoli jokes that five should be the minimum target this time around.

“It’s pure excitement, pure excitement. We saw last night that if you’re nervous, you don’t perform but we got through and that was the objective. Now, there is nothing to be afraid of.”

After talks with the FAI, it was confirmed on Friday night that the three home games will be played at the Aviva Stadium, starting with Molde on October 22nd and ending with the Gunners on December 10th. But Giovagnoli's greater wish is that some fans might be allowed in to see the games and support the team. “It’s an unbelievable pitch to play on and an unbelievable atmosphere and environment. Just imagine if we had our friends there what it could be.”

While he continues his preparations for Sunday, he has other things to be getting on with, like answering all the messages he received in the immediate aftermath of Thursday night’s victory.

“Yes, there were a couple of hundred from people that I know and another couple of hundred that I don’t know; messages from all over the world. I try to respond to everybody but I am still responding actually.”

His wife is in regular contact from back home too. “She was crying before the game,” he says, “and then after the game she was laughing, so this was a good thing because if it was the opposite it would mean things aren’t going really well.”