Rangers, Spurs and Leicester and all get off to winning starts 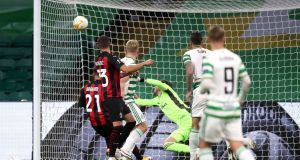 The Scottish champions were still smarting from their 2-0 loss in Saturday’s Old Firm derby at Celtic Park when they had to contend with the Italian giants.

The Serie A side dampened an enthusiastic start by the hosts in the 14th minute when midfielder Rade Krunic headed in a cross from Samuel Castillejo before Brahim Diaz added a second with a drive just before the break.

It was the first time Celtic have lost back-to-back games since December 2018, when they went down to RB Salzburg and then Hibernian but boss Neil Lennon will have been encouraged by their second-half display when they refused to give up.

Kemar Roofe made an almighty splash as his wondergoal ensured rain-lashed Rangers kicked-off their campaign with a 2-0 win over Standard Liege in Belgium.

Steven Gerrard’s side had to endure a second-half downpour but Roofe’s stoppage-time strike from the halfway line sank the Belgian outfit, with the former Leeds forward marking his first appearance in over a month due to an calf injury in style.

The sunny disposition Rangers have been displaying since Saturday’s Old Firm triumph grew brighter when James Tavernier slotted home his latest penalty midway through the first half.

Standard striker Jackson Muleka had two efforts crash against the woodwork before the break but the biggest threat after the interval came as the heavens opened.

There were just under 4,000 fans at the Stade Maurice Dufrasne but there were real concerns they would not get to see the game finish as the ball began sticking in the drenched pitch.

Thankfully for the Scottish Premiership leaders, Danish referee Jakob Kehlet allowed the match to go the distance as Roofe’s spectacular effort confirmed his side’s first away win in a group stage since Walter Smith’s team beat Lyon back in 2007.

There were ugly scenes at full-time as a touchline brawl broke out between the two teams after a member of the Standard back-room staff squared up to former Anderlecht striker Roofe on his way off the pitch.

Carlos Vinicius made an impressive debut for Tottenham as he created two goals in a 3-0 win in Group J win over LASK.

Vinicius was starting for the first time as Jose Mourinho gave Harry Kane the night off and he made goals in either half for Lucas Moura and Son Heung-min, while he would have also netted himself had Andres Andrade not scored an own goal.

Gareth Bale started the first game of his second spell and made that goal where Andrade put through his own net, but it is clear the Welshman is still some way off his peak physical condition.

It was a comfortable night for Mourinho’s men in north London as they were not tested against a weak Austrian side and made a good start to a hectic group stage which is packed into an eight-week period.

Leicester made the perfect start to their campaign after a comfortable 3-0 win over Zorya Luhansk.

James Maddison, Harvey Barnes and Kelechi Iheanacho struck to give the Foxes victory in their Group G opener.

Kasper Schmeichel denied Vladyslav Kabayev but the hosts eventually brushed off the visitors from Ukraine without the injured Jamie Vardy.

They travel to AEK Athens next week, after facing Arsenal on Sunday, having made their European return following a three-year absence.