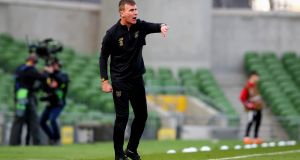 Republic of Ireland manager Stephen Kenny gives instructions to his side during the Nations League game against Wales in Dublin. Photograph: Ryan Byrne/Inpho

Stephen Kenny says that there were changes to the arrangements on the team flight to Finland so as to guard against the possibility of more players being lost as close contacts in advance of Ireland’s Nations League game on Wednesday night.

The FAI’s interim chief executive, Gary Owens, had said at the weekend that he felt the players needed to be further apart from each other so as to avoid a repeat of the situation encountered at the weekend when one positive test ended up accounting for the availability of five players.

At the pre-match press conference in Helsinki, Kenny acknowledged that he had spoken with association operations staff about the issue that that some changes had been made, but he said: “These are things that everyone is learning. There are no experts at the moment in this; it’s a real learning curve for so many people and there will be changes, I think, going forward.”

He lamented the fact, however, that the group have been particularly hard hit because of the specific HSE guidelines which set the bar significantly higher than it is in other jurisdictions.

“It’s hard to believe we lost two players for the playoff at such a late stage because of a false positive connected to contact tracing,” he said in relation to Aaron Connolly and Adam Idah, who had missed the game in Bratislava after having sat 1.7 and 1.9 metres from a staff member who was about to test positive for the virus.

“If it was a Dutch player, he wouldn’t have had a problem because their rules are 1.5 metres. If it was a player in England, they wouldn’t have had a problem but in Ireland, the HSE rules are much more stringent though, much more stringent than anywhere else in Europe, I think. In our country we have to abide by the law, though, and that’s what the medical department did.”

Kenny did not, understandably enough, sound happy with the loss of players and endless distractions of the past week but, he insisted, he appreciates that it is relatively unimportant stuff in the context of a pandemic that has cost so many lives and which continues to severely disrupt society.

“For us, yeah it did have an impact [but] listen, there are people experiencing far worse than we are at the moment. This coronavirus has killed thousands of people throughout Europe and bigger numbers throughout the world. So it’s been bigger than sport.”