Conquering Europe still the holy grail for manager and owners 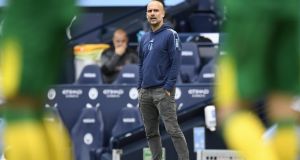 Until he wins the trophy for a third time the accusation from naysayers will be that Pep Gurdiola’s finest moments are in the past. Photograph: EPA

When Manchester City welcome Real Madrid on Friday they resume their quest to claim the Champions League title and make this a season for the ages.

There is never an easy time to face the record 13-time European Cup winners yet in City’s 2-1 advantage, Sergio Ramos’s suspension and the absence of Gareth Bale, here is a gilded chance that Guardiola acknowledges must be taken to advance towards the prize that would make his 2019-20 vintage immortal.

Guardiola’s side of two years ago created history by claiming a domestic treble that included a 100-point title triumph, but conquering the continent is the holy grail. In the past decade the Sheikh Mansour project has reeled off four Premier Leagues titles, two FA Cups and five League Cups. Although the League Cup was won this season, if City falter again in the Champions League it will soon fade from memory.

For Guardiola the stakes are high. His CV shows no Champions League victory for nine years and no semi-final since 2016. Until he wins the trophy for a third time the accusation from naysayers will be that his finest moments in the most rarefied air are in the past.

Guardiola’s stance is that the Premier League is harder and thus more prestigious. Next year, though, it will be a decade since his Lionel Messi-led Barcelona gave Manchester United a 3-1 lesson at Wembley that followed a similar schooling two seasons before in Rome.

In 2011, Guardiola was 39 and seemed destined to make the Champions League his personal property. Yet his lustre in the competition has faded. Since his Bayern Munich lost against Atlético Madrid in the semi-finals his record is disappointing: last 16, quarter-final, quarter-final with City. In each of these failures there was misfortune but the Catalan’s decisions proved the key factor.

Yet Guardiola, who stated in 2016-17 that he did not do tackles and who billed himself as an attack-only aficionado, was clear his team would be unable to leave the principality with the lead intact. Instead in a downbeat comment he asserted City would be “killed” if they did not score. What unfolded was a front line of Raheem Sterling, David Silva, Kevin De Bruyne, Leroy Sané and Sergio Agüero failing to register a shot on target until just past the hour, and by the close Monaco had won 3-1 and gone through on away goals.

Over the following two seasons City fell to similar defensive deficiencies and some odd Guardiola selections. For April 2018’s quarter-final first leg at Liverpool – seemingly cowed by a Mo Salah-led attack – he plumped for the pragmatism of Ilkay Gündogan out wide instead of Raheem Sterling’s verve: the former had never operated on the right for City. Asked afterwards if this worked Guardiola replied: “We lost 3-0.”

His team were also defeated in the return (2-1) and the disarray was summed up by Guardiola being sent off for complaining to the referee, Antonio Mateu Lahoz, for (wrongly) disallowing a Sané strike. “Mateu Lahoz is a special guy, he likes to be different,” said a seething Guardiola.

The exit last year against Tottenham came on a breathless evening at the Etihad Stadium yet City’s defeat – again on away goals – could be traced to another odd choice: the standing down of De Bruyne, Guardiola’s best player, for the match in London. Spurs won 1-0, City missed the Belgian’s creativity, and thus departed without a precious away goal. Mauricio Pochettino’s side lost the return 4-3 but progressed on a 4-4 aggregate.

Is the City defence fragile?

Now, as Real arrive, an irony is that City’s defence may be weaker than at Monaco. Then, Willy Caballero superseded the hapless Claudio Bravo, the ageing Bacary Sagna and Gaël Clichy played at full-back, and the below-grade Aleksandar Kolarov and erratic John Stones were in central defence. Guardiola’s answer to the capitulation was to clear out three of this back four plus Pablo Zabalata in summer 2017, and buy three full backs: Monaco’s Benjamin Mendy, Tottenham’s Kyle Walker and Real Madrid’s Danilo in a £130 million investment, with Ederson’s £34.5 million signing added to solve the goalkeeping problem.

Of the crop only Ederson and Walker have been a success, with Danilo having left and Mendy injury prone and suspended. Four years later Aymeric Laporte, bought in January 2018, is Guardiola’s sole high-class centre back, with Stones having fallen behind the 19-year-old Eric García. The news that García has refused a new deal and may leave for Barcelona hardly suggests a settled player – and thus a settled rearguard – should he start against Real. Zidane’s side have Eden Hazard’s devilry and a number nine, Karim Benzema, who is enjoying a career-best campaign of 21 goals in 37 La Liga appearances and four in seven in the Champions League.

But, as Guardiola states, now is the time for him and his players to go for a glory that would make them their club’s most vaunted names. – Guardian