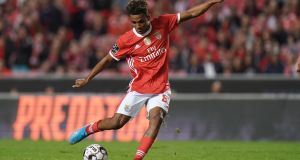 Benfica’s Gedson Fernandes. Spurs are in the middle of an injury crisis, and may view the offer to sign Fernandes as an opportunity worth taking. Photograph: Gualter Fatia/Getty Images

West Ham fear they will miss out on Gedson Fernandes to Tottenham after learning that the Benfica midfielder has been offered to their fierce London rivals.

West Ham want to sign Fernandes on an initial 18-month loan but the latest twist in a complicated saga has seen Spurs enter the race after being contacted by Jorge Mendes, the player’s new agent. It is understood that Mendes, who has historical links with José Mourinho, has recently started representing the Portugal international.

West Ham have held talks with Benfica over a deal for Fernandes this week and made a fresh proposal to the Portuguese side on Thursday. It is understood that reports of the transfer being agreed in principle are incorrect.

Spurs are in the midst of an injury crisis, and may view the offer to sign Fernandes as an opportunity worth taking. Mourinho wants to sign Milan’s Piatek after losing Harry Kane to a hamstring injury until April, and he needs reinforcements in midfield, with Moussa Sissoko also out until April following knee surgery.

Fernandes, who can play in central midfield or on the right, could give Spurs an easy way of bolstering the depth of their squad.

Fernandes is regarded as a long-term prospect by David Moyes, West Ham’s manager. The 21-year-old, who has also been linked with Everton, Lyon and Manchester United, would not be expected to make an immediate impact.

It is believed that Fernandes has family in London, and is open to moving to the city. However it remains to be seen whether Spurs firm up their interest or leave the path free for West Ham.

West Ham will not consider their January business done if they sign Fernandes. Moyes is considering a move for Stoke’s Joe Allen, and the club also hold an interest in another midfielder, Genk’s Sander Berge.

Crystal Palace have signed Everton’s Cenk Tosun on loan until the end of the season, a little over two years after the Turkey striker expressed relief about not ending up at Selhurst Park.

The 28-year-old was in south London on Friday to complete his medical, with Palace’s chairman, Steve Parish, saying he was delighted to add to Roy Hodgson’s squad.

“We’ve enjoyed a great first half of the campaign, and Cenk’s arrival will bolster our squad as we push for a top-half Premier League finish,” Parish said.

“Cenk has a proven record as a goalscorer and we’ve admired him for some time, so I’m very pleased to welcome him.”

Tosun was the subject of interest from Palace in the summer of 2017 but rejected their approach before choosing to join Everton from Besitkas for £27 million the following January.

“About my transfer to Crystal Palace, I can say that I’m very happy the move failed,” he said in 2017. “Because I get to stay at the club and I am doing very well at the moment in both the league and Champions League.”

But having made only two starts for Everton this season and keen to secure a place in Turkey’s Euro 2020 squad, Tosun has signed a deal that is understood to contain an option to purchase him for £20 million.