Robbie Brady a fitness concern for Burnley with bruised ribs 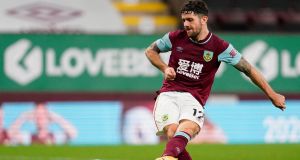 Robbie Brady looks set to miss Burnley’s League Cup game at Millwall on Wednesday after aggravating a rib injury against Leicester on Sunday evening. The seriousness of the problem was being assessed on Monday but he is regarded as doubtful at this stage for the Premier League visit of Southampton on Saturday.

There was no immediate suggestion from Sean Dyche that the injury might affect the availability of the Dubliner, who was replaced 40 minutes into Sunday’s 4-2 defeat, for Ireland’s games in the next international window.

Clearly, though, another spell on the sidelines for the 28-year-old in advance of the Euro 2020 play-off game in Slovakia and National League matches against Wales and Finland would be of concern to Ireland manager Stephen Kenny who brought Brady on to good effect in Bulgaria then started him at home to Finland. The Burnley boss suggests that is when the player first sustained the injury.

It would also be a blow to Brady, who has had more than his share of injury setbacks over the past couple of seasons.

“We think it’s bruised ribs and they can be sore,” said Dyche, immediately after Sunday’s game. “He’s been carrying it since being away with the national side, and unfortunately got a bang on it again tonight. It’s a shame for him because he’s had a tough one with injuries, so we’ll see how that settles down, but it’s another challenge.”

Despite the defeat, Dundalk-born Jimmy Dunne had a better night on Sunday as he marked his Premier League debut with a headed goal in the second half.

The 22-year-old, who has previously been called into extended Ireland squads by both Martin O’Neill and Mick McCarthy, made his first senior appearance for Burnley in the League Cup last week and with centre backs Ben Mee and James Tarkowski both injured, kept his place for the Leicester game.

“I was delighted enough as it was to get a starting place,” said the Irish defender, who has more 80 senior games under his belt from various loan spells away over the past three years. “To get a goal is overwhelming, in some ways. The result didn’t go as planned but there’s lots to take away from it and lots to learn.

“The day before the cup game (against Sheffield United, which Burnley won on penalties) I found out I was playing and in the build-up to this game I found, through the work we were doing. I settled my head to prepare myself, get the basics right and work hard in the week.

“I’m very lucky to have the experienced players around me at the club who often talk to me and lead me through it, so I’m very fortunate to have that. It’s difficult for young players and probably especially for defenders to get opportunities at this level so you have to take them when they come.

“The squad is tight a bit at the minute with injuries and lack of numbers,” he acknowledged, “but that does provide opportunities for me to get in there and show what I’m made of.”