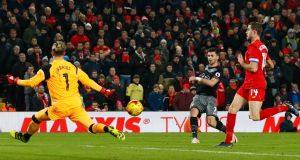 For Southampton, it was a night they will cherish for a long time and a victory that will go straight into the list of great occasions in the club’s history. They had knocked out Liverpool, the eight-time winners, and over two legs what a tribute to Claude Puel’s disciplined, talented players that they stopped the Premier League’s highest scorers from registering a single goal before the final, decisive blow from second-half substitute Shane Long in the first minute of stoppage time.

The prize is a Wembley final on February 26th and, on this evidence, Southampton will fancy their chances if that pits them against Manchester United. Why, after all, be afraid after putting in this kind of heroic performance? Southampton gave everything to dispose of high-calibre opponents. They made it feel like a trick of the mind that they were missing their best defender and, by the end, Liverpool simply ran out of ideas.

Jürgen Klopp’s team have seldom looked so unimaginative in attack and it is becoming a familiar theme given the encounters between these sides this season. Three times they have played one another and each time Liverpool have failed to score – and Southampton can now look forward to their first final in this competition since 1979.

Under the floodlights, with the volume turned high, perhaps the most impressive part of Southampton’s performance was the personality that Puel’s team demonstrated. Equally, it was also clear that the nature of their 1-0 win in the first leg had given them confidence. Southampton had finished that night with a mix of triumph and frustration bearing in mind the number of chances that the match-winner, Nathan Redmond, passed up and it quickly became apparent that they were simply unwilling to surrender that position without an almighty fight.

There was one awkward moment early on when Jack Stephens, barely a minute or so after being serenaded by the Southampton fans behind Fraser Forster’s goal, tried to play the ball to his goalkeeper and succeeded only in kicking it out for a corner. Stephens, a 22-year-old whose career has been largely taken up with a series of loan spells at Swindon Town and Coventry City, was playing because of Virgil van Dijk’s ankle injury at a time when José Fonte has just left the club.

Yet he quickly recovered. Oriol Romeu and Steven Davis, both vastly underrated players, were operating just in front of Southampton’s defence and that solid base also gave the visitors the encouragement to break forward in a series of penetrative counter-attacks.

Redmond’s speed and direct running was a prominent feature and there was a good balance to the way Southampton defended in numbers and then broke at speed. The early onslaught that might have been anticipated from Liverpool did not materialise and Southampton, just as happened in the first leg, will reflect they could have made the night a lot easier for themselves with some better finishing.

Dusan Tadic will certainly feel he should have scored from a 37th-minute chance, teed up by another of Redmond’s forward bursts, though perhaps the credit should go to Loris Karius for being so quick off his goal-line to charge down the shot. Davis also had chances to score and both times the threat originated on the left side of Southampton’s attack. Trent Alexander-Arnold, deputising for the injured Nathaniel Clyne as Liverpool’s right back, is rated highly by Klopp but this was the first time the 18-year-old has looked vulnerable.

Liverpool looked unusually hesitant at the start, with little cohesion between their attacking trio of Roberto Firmino, Daniel Sturridge and Philippe Coutinho, but they began the second half at a higher tempo, attacking the Kop and finally appearing to remember there was a Wembley final as the prize.

Forster came perilously close to conceding a horrible goal when he misjudged Emre Can’s 20-yard shot nine minutes into the second half before rescuing himself with a brilliant, one-handed save to claw the ball away from his goal-line.

Five minutes later, Sturridge had another chance inside the six-yard area when Jordan Henderson’s cross ricocheted into his path off a Southampton defender. Sturridge rushed his shot, volleying into the crowd, and could not control another opportunity shortly afterwards.

These, however, were the first moments when Southampton looked in danger of losing their way. Their early momentum had gone and, though Redmond continued to look lively, it was also becoming apparent that Puel’s men would face some concerted pressure during the last 20 minutes.

“Attack, attack, attack” was the plea of the crowd and Liverpool, to give them their due, pinned their opponents back during those moments.

Southampton had to ride their luck at times and, just before the goal, Liverpool felt they had a penalty because of Stephens’s challenge on the substitute Divock Origi. Yet nobody could say it was a lucky victory.

It was a triumph for organisation, resilience and togetherness, culminating in the brilliant counterattack from their own penalty area when Josh Sims, one of their second-half substitutes, carried the ball upfield and set up Republic of Ireland striker Long for the winner.