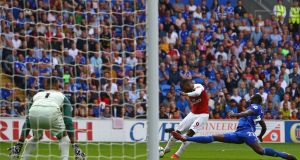 It was a thrilling game, full of goals and riddled with mistakes, and by the end of it Unai Emery could breathe a sigh of relief as he celebrated a second successive Arsenal victory. Cardiff, to their credit, pushed Arsenal to the limit, aided by some dreadful defending and another difficult afternoon for Petr Cech, but ultimately Emery’s team had too much firepower up front.

Twice Neil Warnock’s team came from behind to peg the visitors back, with Cardiff scoring their first Premier League goals of the season in the process as Victor Camarasa and Danny Ward capitalised on familiar defensive frailties in an Arsenal team that has conceded eight goals in their opening four matches.

The good news for Arsenal, however, is that things are starting to click at the other end of the pitch, where Pierre-Emerick Aubameyang and Alexandre Lacazette scored their first goals of the season. Shkodran Mustafi got the other with a powerful header on a day when the art of defending seemed to go out the window for both teams.

It was one of those games that was never going to be dull. That much was clear with less than 30 seconds on the clock, when Petr Cech got himself in a tangle inside the six-yard box, trying to deal with a backpass from Sokratis Papastathopoulos. It was a sign of things to come for Cech and Arsenal, who were extremely fortunate not to fall behind in the seventh minute, when the goalkeeper made a pig’s ear of another backpass from the same player. Cech, who is clearly not comfortable with the ball at his feet and the style of play that Emery is demanding from him, passed the ball straight to Harry Arter as Cardiff pressed high up the pitch. A couple of Arsenal players held their heads in their hands only for Arter to thrash a right-footed shot from just inside the area over the bar. What a reprieve for Emery’s team.

From Cardiff’s point of view it was a golden chance wasted and worse was to follow for the home team as Arsenal took the lead through Mustafi, only a few minutes after the German had stabbed a presentable opportunity over the bar following Neil Etheridge’s save from Aaron Ramsey. Granit Xhaka delivered the corner from the left – one that Cardiff could have avoided conceding in the first place – and Mustafi got away from Sol Bamba, his marker, to send a bullet header high into the net.

Although Lacazette hit the post later in the first half, Cardiff responded well to going behind. A nice move down the Cardiff right involving Bobby Decordova-Reid and Camarasa ended with the former delivering a low inviting centre that Danny Ward was agonisingly close to getting a touch to as the ball skidded across the six-yard box. Junior Hoillet, loitering at the far post, then wastefully blazed high and wide.

Arsenal were dominating possession, yet they continued to look vulnerable defensively and in that respect it was no real surprise when Cardiff brought parity on the stroke of half-time following a catalogue of errors that started with Xhaka carelessly giving away possession with a wayward crossfield pass that landed straight at the feet of Junior Hoilett, inside the visitors’ half.

Hoilett moved the ball on to Joe Bennett via Arter and Arsenal got themselves into a terrible mess trying and failing to deal with the left-back’s cross. Nacho Monreal somehow allowed Camarasa to get away from him at the far post – the failure of any Arsenal player to attack the ball with any conviction was alarming – and the Spaniard pivoted before thumping a rising shot beyond Cech. Cue delirium among the home supporters as they celebrated their first Premier League goal for 1,597 days.

The second half followed a similar pattern to the first. Cech passed the ball straight to a Cardiff player within 60 seconds of the restart and not long afterwards Etheridge was at full stretch to keep out another Mustafi header from a corner. Arsenal, strangely, were looking at their most dangerous from set-pieces until the lovely passage of play that saw Aubameyang restore their lead.

Mesut Özil, who returned to the Arsenal lineup in a wide role, threaded a pass to the feet of Lacazette, whose clever first-time flick found Aubameyang. With Sean Morrison backing off, Aubameyang shifted the ball on to his right foot and curled a splendid shot into the far corner from 18 yards.

What followed was classic Arsenal. Anthony Taylor’s decision to penalise Lacazette for a foul on Arter was questionable, but Arsenal needed to defend the set-piece so much better than they did. Ramsey somehow ended up marking Morrison, the Cardiff central defender, who towered above him to nod across goal. Ward was then left totally unmarked, although that should take nothing away from the quality of the header that went in off the post.

Arsenal needed to respond again and, to their credit, they managed to find a winner. Lucas Torreira, who impressed after he came off the bench in the second half, released Lacazette in the penalty area and the Frenchman made the most of the room that Bamba afforded him to thrash a right-footed shot inside Etheridge’s near post. Incredibly, Morrison could have equalised in injury time but headed over from inside the six-yard box.

Kildare chairman calls on government to remember importance of sport 05:41
Stuart Lancaster knows Leinster’s strength in depth will be key in busy schedule 05:30
Corofin’s quality won’t have chance to shine on biggest stage 05:00
Heroic insanity: When Michael Dunlop raced home in memory of his father 05:00
Gerry Thornley: Consistent trailblazers New Zealand once again ahead of the posse 01:00