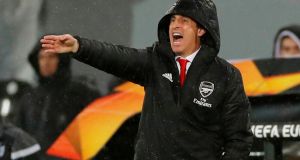 Unai Emery has admitted for the first time Granit Xhaka may not play for Arsenal again, with the troubled midfielder informing the manager he is not available for selection.

Xhaka will not travel to Leicester for tonight’s fixture, meaning he will miss a fourth consecutive match since his stormy departure from the Emirates Stadium pitch against Crystal Palace in October. He was relieved of the captaincy this week, and Emery floated the possibility he may have played his final match for the club.

“As a coach I have a responsibility for the team: we need a player like Granit Xhaka,” Emery said. “But also, I don’t know if he’s going to play [for us] again. I don’t know because, if he is available in his mind to continue helping us and continue defending the Arsenal shirt, I think time is giving us that solution. Then, if I decide he is in the group with us, if he is ready and 100 per cent in his mind with the decision to help us – we have a solution.”

While Emery was emphatic in stating Xhaka’s absence is “my decision, 100 per cent”, he has had little option but to make that call given the Switzerland international has made his own feelings clear. “He said to me that he is not available yet to play; not Wednesday [the 1-1 draw at Vitória Guimarães], not tomorrow,” he said.

Even if the wider ramifications are yet to become entirely clear, losing Xhaka deals Emery a significant short-term problem. Dani Ceballos, who limped off in Guimarães, will miss the Leicester game and Arsenal are running out of recognised first-team midfielders.

“After Ceballos’s injury we have one less player to use tomorrow in the midfield and we now don’t really have a lot of players to play in this position,” he said. “It’s important now to [continue] without Granit Xhaka but I don’t know; maybe he can play in the future, maybe he can’t play.”

Arsenal are already making plans for the latter scenario and, when asked whether he had spoken to the club about the eventuality of Xhaka moving on in January and requiring a replacement, Emery said: “Yes, I asked that question. The club knows the player’s decision at any moment, and my decision or idea about that situation and the circumstances.”

It is hardly outlandish to think Xhaka will seek a transfer as soon as the transfer window opens but the head coach would not say whether the player had already asked to leave. “I am not thinking about that because we are in November and we are going to play a lot of matches in November and December,” he said. “We cannot change him in that two months.”

Emery was reflective on the subject of Arsenal’s season, which feels on a knife-edge going into a meeting with Brendan Rodgers’ third-placed side. A defeat would put them nine points behind Leicester and recent performances have offered little encouragement the gap will be narrowed. But Emery pointed out a pile-up of what, in his eyes, are mitigating off-field factors that have weighed Arsenal down beyond Xhaka’s spat with the fan base, including the August departure of the former captain Laurent Koscielny and the car-jacking incident that beset Mesut Özil and Sead Kolasinac shortly before the campaign began.

“I’m not really disappointed with our work,” he said. “I am being realistic because some circumstances did not help us to achieve the best emotional balance. Özil’s circumstances, Kolasinac, Laurent Koscielny’s circumstance. Remember also that, if he was here, the captain would be Koscielny and that would give us no problem.”

He accepted Arsenal “didn’t impose as I want” his plans in recent games, though, and cited the Leicester game as an ideal opportunity to put things right. David Luiz and the new captain Pierre-Emerick Aubameyang will both return to the starting line-up after being rested in midweek and there may well be a second consecutive league appearance for Özil, who was one of the better performers in the draw with Wolves last Saturday.

“The most important thing is our mentality and going there thinking ‘We are Arsenal’,” he said, and such an attitude will be crucial given that his team have been cast as outsiders to win the game. “We will go there with confidence and also strong in our mentality to be together and go to work against them.” – Guardian

Lowry and Harrington avoid the elephant in the room 15:04
India coach Ravi Shastri hails ‘one of the greatest series ever’ 14:45
Ireland midfielder Conor Hourihane set for Swansea loan spell 14:25
Richard Keogh has joined Huddersfield until the end of the season 13:25
Jordan Henderson takes up ambassadorial role in support of NHS 13:05