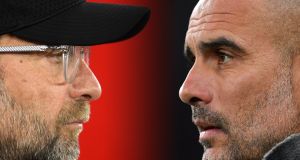 At this juncture the answer has to be yes as the champions’ points return is the lowest since Pep Guardiola’s first season when they finished third and trophy-less. As they head to Liverpool, City have 25 points from 11 games, one more than in 2016-17. Then Guardiola’s side had lost once – at Tottenham – and scored 25 goals while conceding 10. This term City have scored more (34) and conceded one fewer but they have lost twice.

Compare these numbers with those of their two championship-winning seasons. In the record breaking 100-point campaign of 2017-18 there were 31 points, no defeats, 38 goals scored and seven conceded after 11 matches. Last year’s campaign shows 29 points, 33 goals and four let in.

If City have been unable to go toe-to-toe with Liverpool, who are six points ahead and still to lose, mitigation can be found. Jürgen Klopp is yet to have a key outfield player injured as Guardiola has, with Aymeric Laporte ruled out by a knee injury until next year. The Frenchman is the defensive lynchpin, as Virgil van Dijk is for Liverpool, so here is a key factor why City are already two victories behind their rivals.

How can City put eight past Watford but lose to Norwich and Wolves?

A clue to the conundrum might be found in Saturday’s 2-1 win over Southampton. Saints scored early – after 12 minutes – and then hung on for nearly an hour as City lacked ideas beyond bombarding the visitors’ area aerially. After raining in countless crosses Sergio Agüero and Kyle Walker finally scored to secure a victory that was tighter than expected against a side hammered 9-0 by Leicester City in their previous league outing. Southampton’s plan was to defend deep and hit City on the counter – James Ward-Prowse’s opener came this way – and it nearly worked as successfully as Wolves’ similar blueprint when beating City a month before.

Then, again, they appeared one-dimensional and the game was locked at 0-0 until two breakaway goals from the pacey Adama Traoré, following errors in City’s build-up. In each of these matches Nicolás Otamendi was a further weakness, Guardiola forced to start him at centre back because of Laporte’s injury.

Norwich inflicted City’s other loss and that day a mix-up between the Argentinian and John Stones allowed Teemu Pukki’s winner. After the Wolves reverse City won the next three outings, Otamendi featuring for only 60 seconds in total, before they again struggled with him in the side during Wednesday’s 1-1 draw at Atalanta. Expect Otamendi to be a replacement at Anfield. But if the match becomes cagey City may struggle to break Liverpool down, as they did when playing Wolves and Southampton.

Has Guardiola changed anything tactically to evolve the team?

Despite defending the title with 98 points Guardiola looked to address a glaring weakness regarding dead balls by hiring Nicolas Jover in the summer. The Frenchman is a set-piece specialist coach who previously worked at Brentford, and was followed into City by the analyst Dylan Jones. Jover arrived because last season only 11.6 per cent of City’s goals derived from set pieces – 12 from 95, the division’s lowest – and while their 148 set pieces was the highest their 8.1 per cent success rate was the lowest, compared with Liverpool’s 22 goals from 144 set plays (15.3 per cent).

Jover’s work at Brentford had attracted the England coach Steve Holland to study it before the World Cup in Russia, and Gareth Southgate’s side utilised dead balls successfully at the tournament. Jover’s addition is working: six strikes have come from 56 set-piece efforts (half as many as in 2018-19), which is one more than Liverpool, though their five have come from 47 attempts.

Should Guardiola again look for a draw as he did last season at Anfield?

When asked whether City had to win on Sunday because of the points difference the manager insisted not. Although this may prove correct given there would be 26 matches remaining he dare not lose. Last season’s stalemate followed three defeats for City at Anfield under Guardiola and he looked to stymie Liverpool’s hyper-fast style by easing the pace.

This worked in terms of avoiding another loss there and might have yielded a win had Riyad Mahrez not missed a late penalty. “We controlled them in terms of the counterattack with their front three,” said Guardiola. This illustrates the respect – even fear, maybe – he has regarding the Mohamed Salah-Roberto Firmino-Sadio Mané trident, and given City’s issues in defence he may again decide going for a share of the points is prudent.

What defence would give City the best chance of a win?

This is a crucial poser given how vulnerable Guardiola’s team can be to pace, the aerial ball and breakaway attacks: all of which, via the front three plus Van Dijk’s height and power, are methods Liverpool will use. Perhaps the best way to negate this is for Guardiola to field a three-man centre back shape of Walker-Fernandinho-Stones, with João Cancelo as a right wing back and Benjamin Mendy the left-sided one.

Walker operated in this position in England’s run to the World Cup semi-final and having a five-man rearguard when Liverpool have possession would close space along the sides and should offer greater protection. This defence would hardly be the tallest but Laporte’s absence and the failure to sign Harry Maguire to replace Vincent Kompany leave Guardiola scant alternative.