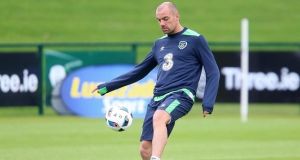 Sunderland have started an internal disciplinary process against Darron Gibson after footage emerged of the midfielder criticising team-mates in a bar.

The Republic of Ireland international was recorded in conversation with fans following a 5-0 friendly defeat to Celtic and offered some frank and at times foul-mouthed verdicts on the commitment levels of some in the dressing room and the overall state of the club.

The Black Cats said in a statement: “Darron Gibson has not conducted himself in a manner befitting Sunderland Football Club. As a consequence, we will initiate our internal disciplinary process to deal with the matter.

“Darron has apologised this morning.”

Saturday’s thrashing by the Scottish champions on Saturday proved a bitter way to mark the 20th anniversary of the Stadium of Light.

Gibson was a second-half substitute in the match, arriving with the scoreline already at 5-0, and was filmed debating with supporters, seemingly under the influence of alcohol.

Having asked the group to name those he was referring to he replied “there’s one” when Lamine Kone was identified and “next one” to suggestions of Jeremain Lens and Wahbi Khazri.

When Gibson’s decision to be out in a bar soon after the Celtic loss was raised, he replied “I might be off my face in here but I still want to play for Sunderland.”

Gibson made 12 appearances for the Black Cats after signing from Everton in January.