Injury concern for Ireland as James McClean limps off 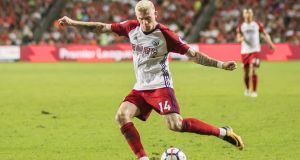 James McClean could be set for a spell on the sidelines before the Premier League season has even started after he picked up a knee injury in West Brom’s pre-season friendly loss to Bristol Rovers.

With Ireland’s trip to Georgia and the home tie against Serbia in the 2018 World Cup qualifiers in just over a month’s time, it looks like concering news for Martin O’Neill after Baggies manager Tony Pulis admitted to being “worried” about the winger.

McClean limped off in the 48th minute of West Brom’s loss after only coming into the side at the last minute due to an injury suffered by Matt Phillips in the warmup.

Albion also lost Chris Brunt to injury in the same game but Pulis said McClean’s is the more serious.

“James is the most concerning at the moment because it is in the knee area and we’ll get that scanned to see what that tells us.

“We’re hoping Chris’s problem is not so serious. It’s a question of whether he’s strained his calf or it’s just a result of landing awkwardly.

“Matty reported a tight hamstring so it made no sense to risk him.

“Pre-season is all about getting the players through without picking up injuries and so this is the most disappointing part of the game for me.

“There were some aspects of our game that pleased me and others which didn’t, but we’re not playing for points, we’re playing for fitness.”

1 Ken Early: Handball ‘crisis’ a timely distraction from the grim bigger picture
2 The Offload: Springbok heavyweights heading for Pro14
3 Exeter coach Baxter calls for an end to mass Covid-19 testing in rugby
4 All in the Game: No sympathy from Bruno Fernandes
5 All Blacks facing a Christmas in quarantine
Real news has value SUBSCRIBE