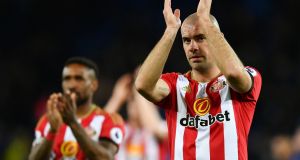 Darron Gibson, who appeared to suggest that Lamine Koné, Jeremain Lens and Wahbi Khazri were among those not pulling their weight for Sunderland. Photograph: Dan Mullan/Getty Images

The Sunderland midfielder Darron Gibson has claimed his team are “fucking shit” and has accused a number of his team-mates of not being committed to the club.

Gibson was filmed on Saturday evening, after Sunderland’s 5-0 friendly defeat to Celtic, in conversation with a group of supporters. Seemingly speaking under the influence of alcohol, he invited the fans to name players whose effort was lacking and contrasted their attitudes with his own.

“We’re fucking shit,” he said, before being asked whether that bothered him.

“Of course I am [bothered]. I don’t want to be shit. There are too many people are the club who don’t give a fuck.”

Asked who he was referring to, he replied “You tell me”, and appeared to suggest that Lamine Koné, Jeremain Lens and Wahbi Khazri were among those not pulling their weight for Sunderland, who were relegated to the Championship last season after finishing bottom of the Premier League.

Gibson responded “Right, there’s one,” when the name of Koné was put to him; when Lens and Khazri were mentioned he responded “Next one” on both occasions.

When it was put to Gibson that drinking after a heavy defeat did not necessarily present the most committed picture itself, he said: “Right, I might be off my face in here but I still want to play for Sunderland. The rest of them fucking don’t though, the rest of them don’t.”

Gibson made 12 Premier League appearances in 2016-17 and, like the other players mentioned, may find his long-term future lies elsewhere as their recently appointed manager, Simon Grayson, remodels his squad. Sunderland did not comment on the video although Grayson is expected to address Gibson’s remarks this week before Friday’s Championship opener against Derby County.