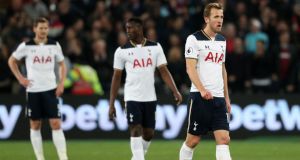 Tottenham Hotspur’s title charge skidded to a halt at the London Stadium as Manuel Lanzini struck a winning goal that thrilled both West Ham and Chelsea. This victory ensures West Ham will be in the Premier League next season and makes it highly unlikely Spurs will overtake Chelsea this season. Spurs had a chance to slash the Stamford Bridge’s club lead at the top of the table to a single point but instead Antonio Conte’s team remain four clear, with a game in hand. Spurs can count their regrets.

It mattered not a jot to Mauricio Pochettino’s team that victory here would weaken the chances of Slaven Bilic remaining in charge of West Ham next season. All the visitors cared about was putting more pressure on Chelsea and, in the process, continuing to prove something to themselves, namely that they really do have the mental fortitude to match their physical and technical prowess.

Nine league wins on the trot, albeit interspersed with a FA Cup semi-final defeat by Chelsea, was strong evidence in their favour before they embarked on their first trip to the new home of their old rivals from east London. The timing was significant for more than one reason, for it was at this stage last season that Spurs’ pursuit of the then league leaders, Leicester City, begun to unravel, a 1-1 draw with West Brom betraying a loss of nerve that resulted in Pochettino’s men failing to win any of their last four matches. Winning here would strengthen the conviction that they have evolved since then.

Pochettino restored Kyle Walker to the starting line-up. His decision to persist with his policy of alternating the right-backs from match to match suggested he was unconcerned about Walker’s commitment despite reports that the player and manager have been rowing over fitness and a mooted transfer. Pochettino also decided to omit Moussa Dembélé for a second successive game, deploying Eric Dier and Victor Wanyama in central midfield in front of a four-man defence.

Bilic drafted Sam Byram and Aaron Cresswell back into the full-back slots in a five-man defence as part of his attempt to stifle the Spurs attack.

The atmosphere at kickoff was as electrifying as it can get in an arena that tends to suck energy out of a football crowd. A crunching challenge by Dier on Cheikh Kouyaté in the third minute added fuel to the fervour. But mostly West Ham were on top in a helter-skelter opening. Home fans leapt to their feet in anticipation of a goal when André Ayew clipped the ball into the path of Lanzini, whose run from deep caught Walker off-guard. That was another thing for the manager to discuss with the defender. Mercifully for Walker it did not lead to a goal as Lanzini skewed a feeble shot way beyond the far post.

West Ham attacked down that flank again in the 12th minute, Cresswell sending a dangerous cross to the back post, where Byram headed wide. Moments later Walker was caught out again and was booked for clipping Lanzini.

Then Mark Noble saw yellow for careering recklessly into Dier. Until then West Ham’s pressing had stopped Spurs from finding a rhythm but Noble’s excessive aggression seemed to trigger a reaction from the visitors, who nearly scored moments later.

Adrián made a rigmarole of saving a long-range shot by Harry Kane. José Fonte did well to block Dele Alli’s follow-up, then Kane tried again from 15 yards and Adrián redeemed himself by sticking out a foot to divert the ball over the bar. Dier went close with a header from the ensuing corner but Adrián blocked that, too.

Hugo Lloris was unflustered until the 27th minute, when he charged out of his box to thwart Lanzini. He did so in a manner that only goalkeepers seem to get away with, hurling himself knees-first at the ball and then following through to take out the opponent. West Ham’s fiery protests cut no ice with the referee, Anthony Taylor.

Christian Eriksen tried to give the home side something else to worry about but his low shot from 25 yards fizzed just wide. But that was Spurs’ only effort at goal after the earlier salvo. So at half-time the hosts were more satisfied than the visitors. And smiles were probably forming on the faces of any Chelsea players tuning in.

Spurs had 45 minutes to avert deceleration in the title race but they laboured. Ayew let them off when he blasted over the bar from the edge of the area. The Ghanaian was then denied a chance to atone when Jonathan Calleri overhit an easy through-ball.

Eriksen fluffed a chance to put Spurs in front, a gentle sidefooter from eight yards never likely to beat Adrián. Son fired off a better effort a few minutes later but the goalkeeper saved again. Then West Ham finally summoned the sharpness to punish Spurs’ sluggishness.

Unsurprisingly the danger came first from the left wing, Cresswell delivering a cross to the back post. Ayew could not get a decisive touch as the Spurs defence panicked but the ball rolled to Lanzini, who was free six yards from goal. He lashed it into the net and ran to savour the rowdy acclaim of the crowd. Chelsea fans everywhere no doubt celebrated with similar gusto.

Calleri should have deepened Spurs’ misery after nicking the ball off Toby Alderweireld but he shot too close to Lloris. No matter, the damage was done.