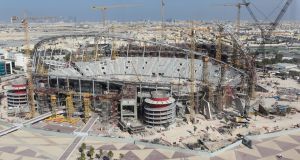 A view of cranes and building works during the construction of the Khalifa International Stadium in Doha, the venue for the Fifa World Cup final in 2022. Photograph: Getty Images

Roll-up, roll-up. Guess what’s on in Bahrain next week?

The FIFA Congress. Yes, the annual get-together where Fifa’s 211 member associations have a banquet, enjoy a lavish opening ceremony, and nod-off in a convention centre for a few hours.

This particular Congress, Gianni Infantino’s second as Fifa president, is noteworthy for a few reasons.

You can expect that the ever-smiling Infantino will attempt to draw a line under ‘old Fifa’ and say all of the nefarious activity that has been highlighted over the past six years, and especially since the May 2015 dawn arrests, is in the past. Finished.

He will present a large, glossy document - that probably no-one will read - which points to a lot of activity in the past year. He will declare that this is evidence that it’s now a ‘new Fifa’.

He will point to the changeover of personnel at Fifa’s executive body - now known as the Fifa Council - and tell us all the old, bad guys have gone. In their place, are men and women not involved in the quixotic decisions to award the World Cup to Russia in 2018 and Qatar in 2022.

And yet . . . as I write this, we learn that Infantino himself is under scrutiny by Fifa’s ethics committee. Again.

The timing couldn’t be worse for Infantino’s narrative that there’s “nothing to see here”.

Last year he was cleared of any conflict of interest surrounding his predilection for use of private aircraft. Read through the detail. If you ask me, it was a lucky escape for him.

Of even deeper consequence and implication, one of Infantino’s ‘new’ council members, Shaikh Ahmad Al-Sabah of Kuwait, recently felt compelled to resign from all football positions.

Shaikh Ahmad outed himself as the person referred to as “co-conspirator #3” in the most recent US Department of Justice indictment on their investigation into Fifa and world football. Shaikh Ahmad denies any wrongdoing, and continues to hold his positions on the International Olympic Council.

But his withdrawal from his football positions puts a dent in Infantino’s ‘new Fifa’ for two reasons.

You won’t be surprised to learn that 14 months ago Shaikh Ahmad hailed Infantino’s election as the Fifa president. A member of the committee that drew-up the so-called landmark reforms, Shaikh Ahmad warned that reform of Fifa “wouldn’t happen overnight”.

However, what will really set the alarm bells ringing for world football is that Shaikh Ahmad is a longstanding and close associate of another Middle Eastern royal, Shaikh Salman Al-Khalifa of Bahrain.

Shaikh Salman is president of the Asian Football Confederation, and a member of Infantino’s ‘new Fifa’ Council. He is also host to the 1,000 football officials who will flock to Bahrain next week for the Fifa Congress.

The timing couldn’t be worse for Infantino’s narrative that there’s “nothing to see here”.

Two years ago, I went to Doha to see the conditions under which migrant workers live and work for myself. I was appalled.

However, while the Fifa circus continues - and Infantino tries to spin his way out of Shaikh Ahmad’s departure - the lives of migrant workers in Qatar, the hosts of the 2022 World Cup, don’t warrant a mention at the Fifa Congress.

It’s another example of Infantino’s version of ‘Fifa reform’ being more smoke and mirrors than substance and genuine change.

Two years ago, I went to Doha to see the conditions under which migrant workers live and work for myself. I was appalled.

As a consequence we began a campaign known as the ‘Hypocrisy World Cup’. The aim was to call out Fifa’s sponsors to properly accept their corporate responsibility and challenge human rights abuses at World Cup infrastructure construction sites in Qatar. It was followed-up with a social media and letter-writing campaign also through #NewFIFANow. www.newfifanow.org

Others have done some excellent work also.

Slowly - very slowly - the organising committee for Qatar 2022 has responded to pressure.

Last month, a report by London-based consultancy for the Qatar 2022 organising committee found that progress has been made but there remain significant areas of concern. For example, many workers are still working 18-hours a day - twice the amount permitted by Qatar law - and half of the contracting companies surveyed failed to give their employees even one day off per week.

A recent Amnesty International report showed that, of 234 workers interviewed, all had their passports confiscated by employers placing those workers in a situation of forced labour.

The International Labour Organisation has given Qatar until November to reform its laws governing migrant workers. Amnesty International sees this review as an opportunity for Qatar and businesses operating in Qatar to demonstrate their commitment to labour reform.

Last year, as part of the ‘new Fifa’ reforms, Fifa commissioned Harvard Professor John Ruggie to provide recommendations on how they should approach human rights issues in its business and operations. It isn’t rocket science - but coming from Ruggie it is authoritative.

What has Fifa done? The bare minimum.

They have set up a human rights advisory board, written a few human rights commitments into their statutes, and commissioned a labour organisation to ‘monitor’ the situation in Qatar. All well and good.

But the Fifa Congress next week is an opportunity missed.

The process around the matters I outline above rate four one-sentence mentions in Fifa’s voluminous and photogenic Activity Report.

That’s how Fifa’s 2011 member associations get the message that this is important.

Until then, like all Fifa reform so far, it’s only words. Actions speak louder than them.