Day of reckoning dawns as Blackburn stare into the abyss 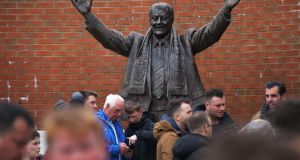 Howard Kendall was a good storyteller. He used to recall how, when recently installed as player-manager of Blackburn Rovers in 1979, the Ewood Park club was in such a state financially it was proposed that the daily delivery of two pints of milk be stopped. Kendall knew as he was at the board meeting when this idea was put forward. It was not the only cost-cutting he heard that evening.

“There was an old director named Arthur Fry and he raised his hand at one meeting I was at,” said Kendall.

“I’ve got the solution,” said Arthur.

“I think we should send out second-class stamps.”

In March 1979, pre-Kendall, Rovers spent £100,000 on acquiring Duncan McKenzie from Chelsea, breaking the club’s transfer record. The price of a first-class stamp was 9p.

It is an illustration, you suppose, that those running Blackburn Rovers today are not the first to struggle with reality.

Here they are, though, almost 40 years on, on the brink of returning to the third tier of English football, which is where Kendall found them at the end of the 1970s.

Kendall took Blackburn up to the old Second Division in 1980, today the Championship, and Rovers have been at that level or above – Premier League champions 1994-95 – ever since.

But by 2pm on Sunday, Blackburn Rovers could in the third division once again. Starting third-bottom of the Championship, Rovers are one of three clubs that can be relegated. Nottingham Forest and Birmingham City are the other two, but Rovers are the club most in peril.

The drop will come as a shock to whatever system this trio of haphazardly-run clubs are alleged to have in place. Birmingham’s owners, Trillion Trophy Asia, are based in Hong Kong; Forest’s owner, Fawaz Al-Hasawi, comes from Kuwait.

And Blackburn Rovers, founder members of the Football League, are owned, of course, by the Venky’s organization based in Pune, India. All three ownerships have many questions to answer, questions that too often for the respective fanbases, go unanswered.

It is 6½ years since Venky’s came across from east of Mumbai to buy a Lancashire institution. Venky’s wealth came from chickens – always liable to provoke a joke – while Blackburn is a post-industrial mill town where there is a significant Asian population and some discomfort about the level of immigration. All 14 constituencies in Lancashire voted for Brexit.

Had Venky’s shown competence, their base in India may not have caused such agitation. But, having acquired the club for just £23m from the Walker Family Trust, Venky’s sacked Sam Allardyce with the team 13th in the Premier League and appointed Steve Kean. Kean’s agent was Jerome Anderson who was advising the Venky’s. Allardyce felt all trussed up; it has been unravelling ever since.

That Allardyce decision was in December 2010. The talk from the new owners was about signing Ronaldinho.

Funnily enough, that transfer did not materialise. Instead, among others, Blackburn bought David Goodwillie from Dundee United, the Scottish club having to contact the FA when a payment was missed.

Rovers hovered into 15th place under Kean but by the end of the next season they were 19th and relegated.

Fans had marked the first year anniversary of the Venky’s takeover by laying wreaths at the foot of the statue of Jack Walker. Walker was the local hero-businessman. It was his family’s hard-earned steel money that saw Kenny Dalglish arrive as manager in 1991 – when Blackburn were second-tier – and Alan Shearer arrive as centre-forward a year later, once promotion had been achieved. Then came Premier League glory.

But once Dalglish and Shearer departed, and Walker aged, Blackburn reverted to a life more ordinary. Still, it was top-flight.

Even when relegation came in 1999 under Brian Kidd, with Walker’s tears being relayed live on a giant screen, they came back quickly under Graeme Souness and won the 2002 League Cup – Damien Duff on the left, Keith Gillespie on the right. Blackburn were Premier League establishment.

Until Venky’s called. Today Rovers are at the end of a fifth consecutive season in the Championship, with parachute money spent, and onto an eighth Venky’s manager in Tony Mowbray. And it could be about to get worse.

When the Venky’s turned up so did crowds of 25,000. This season’s home average has been 12,688. Fan frustration and apathy has brought a decrease in annual turnover to £22.4m in the latest figures. If that sounds low, the annual wage bill of £26.9m means this business model is unsustainable.

Overall the club’s debt has passed the £100m mark. One assumption is that Venky’s can absorb this.

That is not guaranteed, however, and would worry long-suffering supporters when they’re occupying the terraces at Bury and Oldham next season.

That is, if Blackburn go down. Their last game is away, at Brentford. The promising news is that Rovers are unbeaten in four games, whereas Forest have won two of their last ten and Birmingham one of their last eleven. So Blackburn are in the best form of this reckless trio.

Yet it all feels a bit late, this Blackburn postcard from the edge of relegation, with its second-class stamp.

The highs and woes of Blackburn Rovers do not occur in isolation. Burnley is too close for that. Twelve miles – and a great deal of animosity –separate the two Lancashire clubs.

When Burnley were on the brink of losing a Fourth Division play-off to Torquay in 1991, Rovers fans staged one early fly-by taunt, a plane trailing the message: “Staying Down 4 Ever Luv Rovers Ha Ha Ha” as it circled Turf Moor.

Football fans tend not to forget things like that. Hence there is gloating in Burnley at Blackburn’s demise, particularly at a time when under Sean Dyche’s smart management the Clarets are threatening to record a highest place top-flight finish since coming 10th in 1974-75.

That was a season when Derby County were champions and there was not one London club in the top ten. It is different now, no longer a game where northern, provincial clubs like Burnley are able to thrive.

Unless they are carefully managed at all levels as Burnley are. The club did not make a drama out of relegation this time two years ago – they retained their manager, a core of players and won the Championship. Now they have stayed up and will play consecutive seasons in the top division for the first time since those mid-1970s days.

In October Dyche will have been there five years. He represents the club’s stability, intelligence and success. Altogether a contrast with Blackburn Rovers.