‘The chairman messaged me the night of my injury and said, ‘Don’t worry about it’ 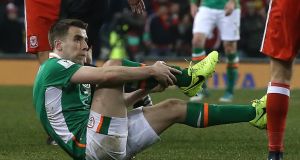 Seamus Coleman, currently sidelined by a double fracture of his right leg, has signed a new five-year contract with Everton, the club have announced. Photograph: Niall Carson/PA

Everton defender Seamus Coleman’s recovery from a serious double fracture of his right leg has been boosted by a new five-year contract.

The Republic of Ireland international, who is out for several months after getting injured in a World Cup qualifier against Wales, has signed the deal which had been on the table since before his injury.

“I’m delighted to get this signed. I’ve been here for a long time and it’s a special club that means a lot to me,” said the right-back.

“Everything had been agreed and I was due to sign it after the international break but unfortunately I got the injury.

“The chairman messaged me the night of my injury and said, ‘Don’t worry about it because when you come back this contract is still waiting for you’. That sums up what the chairman and this club is all about.

Brilliant that from Everton & Kenwright. Parry/Moores did the same for me after I broke my leg at Blackburn in 2003. https://t.co/zVY1ZX5gea

“Farhad Moshiri (majority shareholder) also sent me cards and said the support was always going to be there.

“I’m delighted with how the club has handled the situation. Knowing that I was going to come back and sign it has definitely helped things. It’s a massive boost and gives me something to fight for.

“I want to prove my worth when I come back and show the club were right for rewarding me with this long-term contract.

“This was an important contract. I’m at a good age now and I think the club are showing good ambition and going in the right direction, so it’s really exciting.”

Coleman has had his cast removed and is walking with the aid of crutches but is not rushing his rehabilitation.

“It’s a case of not doing too much too soon — it’s just baby steps at the moment — but I am getting on well so far,” he added.

“I’m starting to put more weight through the leg and I have got no pain. I’m back doing a good bit in the gym and in the pool.

“I’m doing exercise every day, so the recovery has well and truly started. I’m really looking forward to putting on that Blue shirt again.”