Sean Maguire on radar but must wait for Ireland call-up

Martin O’Neill: ‘I’m not so sure in the lead up to these games that it’s the ideal time’ 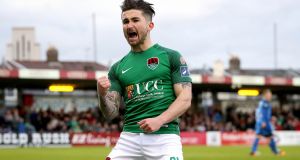 Republic of Ireland manager Martin O’Neill says that he continues to keep an eye on Cork City striker Sean Maguire but suggests that the 23 year-old will have to wait for any international call-up with the forthcoming friendlies pencilled in as preparation for the World Cup qualifier against Austria.

“It’s been a problem position for us and in the last 15 years there’s only really Robbie Keane who has come up and scored the requisite number of goals,” he said on Friday at the launch of the 2017 FAI’s Sports Direct sponsored Summer Soccer Schools programme.

I have plucked players from the League of Ireland before

“Otherwise, we’ve had to share them around although Jon Walters did very well for us in the European Championship, as has James McClean more recently from a wide position

“We had an opportunity to play some new players after the recent game against Wales but I’m not so sure in the lead up to these games that it’s the ideal time to try out some very young players who haven’t been involved before. It’s the lead up to a very important World Cup game. If there’s a player who is outstanding, though...”

O’Neill said that he has not seen as many games over the first third of this Airtricity League season as he did in the latter part of this year. “In terms of bringing somebody in, though; I wouldn’t be averse to that. I have plucked players from the League of Ireland before.”

The more immediate concern for the Ireland manager just now is the impending end of the Championship season and the number of players who will be without competitive action between this weekend and the start of June when Austria.

The plan, it seems, is to bring the group in question together ahead of the other players, and to have a few days of intensive training done for the squad leaves for New Jersey (and the game against Mexico, on May 29th).

“I’m looking at the likes of Shane Duffy who has not played that much recently but is perfectly fit now,” said O’Neill who said the end of the English league campaign had been a mixed affair from an Irish perspective.

“Some of the clubs have gone back to their clubs after being here with us the last time and not kicked a ball, been eternal substitutes but these are the things that you just have to deal with,” he said.

“If the players are playing at the highest level, that’s great. If they are not then you just have to take other things into consideration.”

Shane (Duffy), up until he picked up his injury, I thought he and his partner were as good as anyone in the Championship

As for those involved in teams either relegated or promoted, he added: “John O’Shea’s had a very good career, particularly at Manchester United. He’ll be down at the minute but he can pull himself around.

“The lads at Newcastle will want to be in the side next year; Ciarán’s played a big part there this season and he has come back in there and played some games. And Shane (Duffy), up until he picked up his injury, I thought he and his partner (Lewis Dunk) were as good as anyone in the Championship.”

Details of the FAI camps are at: summersoccerschools.ie