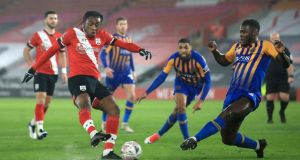 The beauty of chaos is that it usually brings opportunity. With injury and illness taking their strain, Dan N’Lundulu struck to help Southampton into an FA Cup fourth-round meeting with Arsenal on Saturday with his first goal for the club on his full debut before James Ward-Prowse sealed victory with a peach of a free-kick to deflate a spirited Shrewsbury Town of League One.

For absent manager Steve Cotterill, watching on in hospital after spending last weekend in intensive care with coronavirus, it was a performance that would have filled him with pride.

N’Lundulu had impressed in Premier League cameos in recent weeks and took his goal superbly, skipping away from Scott Golbourne before powering in. Danny Ings, who has hit an impasse in contract negotiations over extending his Southampton stay, was among nine first-team players missing.

It was always going to be a big ask for Shrewsbury, 52 places below the Saints in the pyramid, to eke out a result given the start to the year they have had.

They had not played for three weeks owing to a severe Covid-19 outbreak – as many as 20 players and staff tested positive – that put paid to three games and meant they only had three days of squad training since returning from isolation before this game.

In the absence of Cotterill it was down to assistant manager Aaron Wilbraham – who scored in this competition at the age of 40 to help Rochdale to a third-round replay against Newcastle last season – to lead the team alongside academy manager David Longwell.

Cotterill’s intention, if permitted, was to watch the game from hospital in Bristol. That was all the inspiration the Shrewsbury players required and Wilbraham, who said he could tell Cotterill’s health was improving because he was beginning to crack jokes, has maintained dialogue with the 56-year-old, who sent over titbits of team news and tactical thoughts. Presumably Cotterill had a hand in new loan signings Matt Pennington and Harry Chapman making their debuts in filthy conditions on the south coast.

Shrewsbury started sprightly but struggled to stem Southampton’s flow once N’Lundulu drilled in to earn the lead. The Southampton captain, Ward-Prowse, one of just four players to keep their spot in the hosts’ starting line-up, floated a pass upfield and the 19-year-old Caleb Watts, making his debut wearing the No 65, did his best to bring the ball under control. It rolled free and N’Lundulu picked up the pieces before, encouraged by his manager Ralph Hasenhüttl to finish, hammered in from an angle.

Southampton largely kept the visitors at arm’s length but Josh Vela powered over with a vicious strike and the Shrewsbury forward Shaun Whalley tormented full back Yan Valery, one of the more experienced academy graduates in a youthful Saints side, twice sent curling efforts close.

The first had Fraser Forster, who Hasenhüttl recently termed his ‘number one B’ goalkeeper, fretting before it dipped over the crossbar on the half-hour and four minutes later he got a hand to another fine effort before the assistant referee flagged for offside.

Shrewsbury are unbeaten in the league since Cotterill replaced Sam Ricketts in November and had won four of their past five matches and, while that run feels a long time ago now, their newfound belief was evident.

Chapman went on a meandering run before shooting wide and, at the other end, the defender Aaron Pierre cleared off the line after Matija Sarkic, the Shrewsbury goalkeeper on loan from Wolves, saved from Watts. Moments earlier, Jack Stephens almost fed off the scraps of a Ward-Prowse corner.

The substitute Che Adams went close to adding a second but Sarkic superbly cleared off the line but Ward-Prowse made sure of victory after sending a dart of a free-kick through Sarkic’s grasp. – Guardian