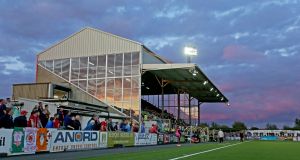 US investment firm Peak6 has completed its takeover of Airtricity League club Dundalk and formally taken control of the club.

It was announced on Thursday evening with the club issuing a statement confirming the news and local businessmen Paul Brown and Andy Connolly insisting that they had found buyers capable of taking the Oriel Park outfit to the next level.

Peak6 have, in fact, been assuming control for a number of weeks now with former Sheffield United chief executive Malachy Brannigan, who has previously worked with a number of other major clubs in England, easing his way into the same role at Dundalk.

Representatives of the company have met with the small number of staff, including manager Stephen Kenny, to provide assurances about the future.

The company, which is based in Chicago where Matt Hulsizer – who has an active interest in Ice Hockey – and Jenny Just established it in 1997, describes itself as “always looking for ways to deliver untapped, exceptional value to the market”.

How much of that it can find in a League of Ireland club, even one that has enjoyed such remarkable success in recent seasons, remains to be seen but it is clearly a very serious operator with one recent report putting the number of different investments it has at just over 4,300 and the combined value at just under $19.6 billion (€16 billion).

In sport, its best known investment in these parts is the 25 per cent stake it took in AFC Bournemouth a couple of years ago which, though hardly transformative, seems to have helped the comparatively tiny Premier League club to compete.

Dundalk supporters will be hoping their money will generate a more obvious bang for their many bucks in Ireland with the club’s ground in need of complete redevelopment and the team requiring investment if it to substantially build on the achievements of two years ago.

Previous flirtations with outside investors have not generally ended well for Irish clubs but there is a strong sense around Oriel Park, it seems, that this time can be different. The new owners are expected to fly in in a couple of weeks to explain why they believe it will.