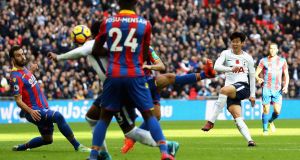 Roy Hodgson turned on his heel and marched back towards the bench. The Crystal Palace manager’s stony-faced fury told the story. Football can be the cruellest of pursuits, and how Hodgson felt it shortly after the hour mark here at Wembley.

His Palace team had held Tottenham Hotspur at arm’s length and created a clutch of chances to have taken the lead. Paulo Gazzaniga, the third-choice Tottenham goalkeeper, had kept his team in it, while Wilfried Zaha had blown a glorious chance following a 57th minute breakaway.

But, in a heartbeat, the game had turned, and Hodgson had that sinking feeling. Son Heung-min’s winner was a beautifully executed finish – quite out of keeping with the rest of his performance and that of his team. The South Korea forward’s body shape was perfect and he got his left-footed shot to bend back into the corner of the net from a yard or so outside of it.

Hodgson could curse how the ball had reached Son. After Danny Rose had jinked inside and seen a shot blocked, Moussa Sissoko recycled the move with a low cross from the right. Yohan Cabaye had the chance to clear but he succeeded only in playing it straight to Son. He did the rest.

Mauricio Pochettino had stressed that this Premier League encounter meant just as much as last Wednesday’s epic Champions League win over Real Madrid but it was plain that his players did not have the same verve. They struggled to get themselves going and, but for Gazzaniga, they would have dropped points. As it was, they could luxuriate in winning when they did not deserve to.

Pochettino’s inclusion of Gazzaniga for his Tottenham debut had been unexpected. With Hugo Lloris out with an adductor muscle problem, Michel Vorm had been in line for a rare Premier League opportunity but, incredibly, he would injure his knee in training on Saturday.

The door opened for Gazzaniga, the summer signing from Southampton, and he would be the hero, having flirted with disaster with his first involvement. With three minutes on the clock, Zaha – a player that Tottenham covet – curled in a lovely cross for Mamadou Sakho. The defender had the run on Gazzaniga but he could not get a touch. Perhaps, he had been spooked by the sight of Gazzaniga leaping wildly in his direction.

With the ball gone, Gazzaniga, essentially, clothes-lined Sakho, laying him out flat. Penalty? It felt like the sort of reckless action that would have been penalised outside the area. The referee, Kevin Friend, was unmoved.

Pochettino was without Dele Alli, the two-goal star of the Madrid tie, because of a hamstring injury, and the home team laboured. The tempo and cohesion was missing. Rose fluffed a first-half header on the corner of the six yard box while Son was torn between crossing and shooting when well-placed on the left of the area. In the end he did neither. The ball went out for a throw-in.

Harry Winks and Harry Kane needed treatment for knocks in the first half, and the former, who was caught on the foot by Luka Milivojevic, did not reappear for the second half. He is now a doubt for England’s games against Germany and Brazil.

It was all a bit stop-start from a Tottenham point of view. Kane looped a 35th minute header over the crossbar, and that was as good as it got for his team before the interval.

Palace did what so many of the so-called smaller clubs have done against Tottenham at Wembley this season – they kept men behind the ball, compressed the space between the lines and looked to punch on the counter or from a setpiece.

They would have led in the 36th minute following a Cabaye corner but for an excellent save by Gazzaniga. Scott Dann rose above Eric Dier and he planted a downwards header towards the corner. Gazzaniga showcased his reflexes and Jan Vertonghen completed the clearance.

Palace’s plan was working. They frustrated Tottenham and, by the hour mark, it was a wonder how they were not in front. It was they who created the best chances. Gazzaniga was the reason it stayed goalless. Him, and a moment of loose finishing from the otherwise impressive Zaha.

Gazzaniga tipped Andros Townsend’s low shot around the far post, after the former Tottenham forward had seized upon a poor ball from Serge Aurier to run through, while he beat out Milivojevic’s header at the far post after a corner had deflected up off Dier.

The Zaha miss was a horrible moment for him and Palace, and it was so unexpected because, when he took the ball around Gazzaniga on a fast break and the empty net yawned, you would have got short odds on him dragging his shot past the far post. That is what he did. The angle was a little tight but a player of his refinement had to score. The chance had been presented to Palace by another blunder from Aurier and Townsend’s through ball for Zaha was perfectly judged. Zaha was furious with himself.