Solskjær hits out at critics after United secure third place 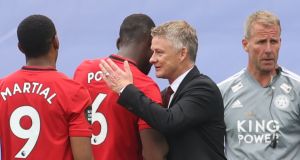 Ole Gunnar Solskjær has taken a swipe at his critics after leading Manchester United back into the Champions League, saying their gloomy forecasts had driven him on.

Solskjær’s team won 2-0 at Leicester on the final day to secure a third-placed finish – an achievement that had been hard to predict with any certainty at the end of January when they lagged six points behind fourth-placed Chelsea. On January 30th, they were 14 points off Leicester in third.

The result at the King Power Stadium meant that Leicester, after a poor run-in, finished fifth, although Europa League qualification may provide a measure of solace. Had Leicester won, they would have finished in the Champions League places and pushed United to fifth. Chelsea came fourth after beating Wolves 2-0 at home.

“It didn’t seem like you [the media] were expecting this – all the predictions were sixth or seventh,” Solskjær said. “That’s all right. If I’m getting criticised that makes me stronger and makes me believe more in what I’m doing. Please don’t praise me too much because you can become complacent. That’s just the way I’m made.

“I was reading through them [the predictions] and some of the staff were discussing them. To finish third with this team and this squad, and where we have been with this rebuild, has been a massive achievement by everyone. We’ve come so far as a team, we’re building a culture. To win this game was massive mentally after losing two semi-finals this season [in the Carabao Cup and FA Cup].”

Solskjær was asked whether United’s progress under him proved he was the right man to challenge Liverpool and Manchester City. “It’s a massive challenge,” he said. “I believe in what I do and what I’ve been doing. We all have different ideas of management. I do it my way. I’m not going to say I’m not the man because I am in the job.”

Bruno Fernandes, the midfielder United signed from Sporting Lisbon on January 30th, endured a difficult afternoon, as did most of his teammates. Solskjær screamed at him to focus in the first half as the Portuguese complained to the assistant referee after a robust challenge from James Justin. But Fernandes, made the difference, playing a through ball to Anthony Martial, who was fouled for a 71st-minute penalty. Fernandes converted it and the substitute Jesse Lingard added the second in stoppage time.

“Bruno has come in and been a massive influence – scoring goals, creating goals, but also his enthusiasm and mentality,” Solskjær said. “Maybe today you can see a tired Bruno and that’s natural because he’s played too much. You can see his passion, he’s moaning a little bit here and there so we’ll have to take that away from him sometimes, but he has stepped up calm as you like and slotted away the penalty.”

Brendan Rodgers felt the penalty could easily not have been given. “I would be interested to see if we’d have got the penalty,” the Leicester manager said. “Jonny Evans has got a touch on the ball. We’ve finished in the second-highest Premier League position in Leicester’s history and I’m really excited about the next step for these players.” – Guardian