FAI may have stumbled on right choice again in Stephen Kenny 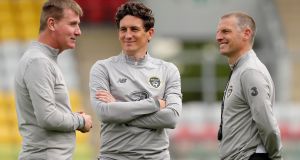 Just what Irish sport needed right now was a shot of optimism and a clarity of purpose and it arrived this week in the bright, spiky, independent form of Stephen Kenny, who has been ushered into the role of Republic of Ireland manager in what must go down as the weirdest circumstances in the history of Irish football.

In this surreal time on Earth – when entire cities are closed and everyone shrugs at the news that Wimbledon has been cancelled as though it were some local Am-dram show called off because the producer took a bout of food poisoning; when Liverpool are 25 points clear of a Premier League that may never finish; when the 2020 Olympics will take place in 2021 and when nobody can say with any great conviction if and when people will be allowed to gather in crowds of five to eighty thousand to enjoy the silliness of other people playing games at a brilliant level, it might be hard to locate the significance of the ascension of Stephen Kenny to the big job of Irish football.

But this is a moment, not just for the Dubliner himself who has grafted creatively and passionately since he famously became “the youngest manager in Europe” when he took charge of Longford Town at the age of 26.

It’s a big deal for Irish football too. If there is one happy outcome to the calamitous and sometimes farcical closing act of John Delaney’s time in charge of Irish football, then it’s this: a local boy in charge of the big teams, a manager who the lads at the flash clubs in England know little and now can show why that doesn’t matter a damn.

The timing was forced, with Mick McCarthy stepping aside after it became clear that the Euro 2020 would not take place this summer. In his farewell video to the Irish fans, McCarthy bade Kenny well, asserted that he had left the senior squad in a good place and breezily made it sound as though completing the playoff task to get the Republic to the European championships was a handy enough opening assignment.

Just like that, big Mick, silver haired, dignified, lightly tetchy, is gone – and gone for good, this time, you suspect, ending an involvement with the Irish football team that dates back to the muddled and muddy days of the mid 1980s when the actuality of qualifying for a major tournament seemed just out of Ireland’s reach: just beyond Ireland’s capability as a country. That stuff was for other teams, other countries, even the fractious other country on the island, to enjoy.

Self-confidence has always been a key issue within Irish football. It was the quality that Jack Charlton brought with him in abundance – an invulnerable and staggeringly rigorous sense of how football and the world in general should be conducted – and which was so wonderfully brought to life again in Ross Whitaker’s recent documentary series. The archive footage of that antic time for Irish society stands as proof of just how omnipotent Charlton was for a year or two: he held a cartoonish, vital presence in the national imagination.

In 1990, Mary Robinson became president of Ireland and a former England World Cup winner was arguably the most popular figure in Irish life. The FAI may have stumbled on the right cocktail with Charlton but it worked and there has been a vague sense then that they’ve been tinkering around with the same spirits and mixers without ever concocting anything to match that original taste. Mick McCarthy, Steve Staunton, Giovanni Trapattoni, Martin O’Neill and McCarthy again were all names which commanded instant English, if not always continental, recognition.

The missing manager in that chain is, of course, Brian Kerr who from 2003-2005 was the last appointment during which the FAI showed faith in a football man rooted in the Irish game. Kerr had the body of work and the self-confidence to operate at the senior international level. But how much faith was really shown in him?

For all of the euphoria on the afternoon of Kerr’s first official appearance, there was a sense of a manager under heightened pressure to prove himself in what was, ultimately, an unlucky campaign. His virtual banishment from the coaching ranks of the association since he stepped down from the role has been a disgrace and a terrible waste of talent and knowledge.

Now, into the picture comes Stephen Kenny, whose first act has been to gently but firmly relieve Robbie Keane of the coaching role he held with McCarthy because he wants to appoint his own staff. If there is an awkwardness over the remainder of Keane’s contract, it is the FAI’s concern, not his.

In his first media interviews Kenny spoke confidently about his faith in the quality of Ireland’s footballers and his belief that Irish teams can develop a football style distinctive from the direct, negative, physical confrontation about which opposition managers have been lightly contemptuous for years. As first impressions go, he promises to be his own man in all of this.

So will it work out? It is an exciting thought. Kenny has lived the best and worst of the domestic Irish football life, claiming five league and three cup titles over his 20-year career and also considering his future in the game after his sacking by Shamrock Rovers in 2012. “When that happened, I thought: what am I doing?” he told Garry Doyle in an interview three years later. “I am working in a business where people whose knowledge of the game I don’t rate can dictate your future. They ask ridiculous questions about football matters and at the end of it all a decision by board members can damage your reputation as manager.”

He may have coined the universal gripe of football managers in that statement. But if the FAI is to develop a more ambitious and financially attractive domestic league and strive towards the vision that Niall Quinn outlined before taking over, then nobody knows the flaws and potential of the domestic game better than the new manager.

This remains a fragile time for the FAI and an uncertain period for its staff. If and when Lansdowne Road is full again and Kenny takes his first step on to the field as manager, he’ll get the reception that this week’s triumph of quiet unfashionable coaching excellence deserves. You get the sense that he won’t be fazed.