Shane Long bundles one in as Southampton see off Villa 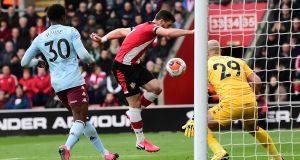 VAR was key to Burnley’s comprehensive 3-0 home victory against Bournemouth in Saturday’s Premier League encounter, with the Cherries falling apart from a competitive position after the system ruled against them.

Aaron Ramsdale had kept Burnley at bay throughout the first half at Turf Moor but Matej Vydra spoiled his clean sheet in the 53rd minute. The Czech raced onto Dwight McNeil’s assist before shrugging off a challenge from Cherries captain Simon Francis and burying the ball.

Then, as it had earlier in Chelsea’s win over Spurs at Stamford Bridge, VAR then intervened in dramatic fashion, with Harry Wilson’s goal at the end of a rapid raid ruled out before Burnley were instead awarded a penalty at the other end. Adam Smith had been penalised for a handball he committed just before Bournemouth broke forward to score — Jay Rodriguez converted the spot-kick.

McNeil exploited Bournemouth’s low mood after the swift change in fortunes by killing off the tie with a third for Burnley, the young Claret leaving Ramsdale stranded with a left-footed screamer.

At St Mary’s, Shane Long scored with his knee in the eighth minute and Stuart Armstrong made the points safe at the death as Southampton beat Aston Villa 2-0 to ease their relegation fears.

Long has hardly been in prolific goalscoring form unless, it seems, the Irish striker is playing against Villa. This was his seventh goal in his last seven appearances against them.

The Slovakian stopper made two early saves to deny Gary Cahill and then Scott Dann, but Van Aanholt would beat him when he steered in a sumptuous free-kick to make it 1-0 on the stroke of half-time at Selhurst Park.

Any hopes of a late Magpies rally were quashed when on-loan Inter Milan winger Valentino Lazaro saw red in second-half stoppage time for his foul on Wilfried Zaha.

In the 26th minute, Irish left back Enda Stevens controlled the ball with one touch before sending a left-footed pile-driver into the top corner. Neal Maupay, however, soon levelled for Brighton by heading home from six yards after meeting Lewis Dunk’s flick-on with half an hour gone. A failed opportunity for United to move into fifth place.

1 Colin Kaepernick’s exile is too fresh for NFL to speak out on US protests
2 Fitzgerald says inter-county game should resume before club fare
3 Aboriginal icon fights for moment free from the weight of history
4 RWC #42: Andrew Sheridan destroys Australia’s frontrow
5 Sonia O’Sullivan: How to keep your competitive edge from going blunt
Real news has value SUBSCRIBE