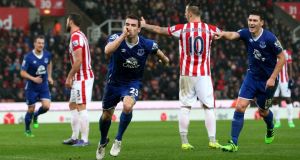 Everton registered back-to-back Premier League wins for the first time this season as a first-half blitz steered them to a 3-0 triumph over Stoke at a rain-lashed Britannia Stadium.

The Toffees grabbed the lead in the 11th minute as Romelu Lukaku’s penalty took him to 20 goals for the campaign.

A Seamus Coleman header then extended the advantage in the 28th minute, and with Aaron Lennon punishing a Philipp Wollscheid error to add a third for the visitors in the 42nd, Roberto Martinez’s men looked to have wrapped things up before the interval.

Things could have been even worse after the break for a lacklustre Stoke side, with the efforts of their goalkeeper Jack Butland — including tipping a Lukaku header onto the bar — key in ensuring they sustained no further damage.

Everton have been accused of underachieving this term, but this was impressive stuff from the Merseyside outfit, who, having built upon their 3-0 win over Newcastle on Wednesday, are up to seventh in the table.

Stoke, in contrast, were abject. They were looking for home comfort here, returning to playing at their own ground following a run of four straight matches on the road that had seen them beaten at Leicester and Manchester United in the league and exit two cups.

But with them slipping to what was their third straight 3-0 league loss and down to 11th in the table, their fans will be concerned about their campaign, so impressive for so long, now fizzling out.

Aleksandar Mitrovic’s fifth goal of the season dragged Newcastle out of the Premier League relegation zone as they edged past West Brom 1-0 at St James’ Park.

Newcastle might have won even more comfortably had it not been for a series of saves by Ben Foster, who needed the help of a post to prevent Andros Townsend from marking his home debut with a goal, but a crowd of 50,152 was left biting its nails as time ran down.

Aston Villa clinched just their third league win of the season to pile the relegation pressure on Norwich.

Joleon Lescott and Gabby Agbonlahor’s first goal for 11 months sealed a 2-0 win, although Villa are still eight points from safety.

Remi Garde’s side remain bottom of the Barclays Premier League but the Frenchman has at least given the strugglers fight.

The Canaries dropped into the relegation zone after Newcastle’s 1-0 win against West Brom and Alex Neil’s side are in serious trouble after six straight defeats in all competitions.

Swansea had to settle for a point in their Barclays Premier League relegation battle as Crystal Palace stopped the rot after five straight defeats.

But defender Scott Dann struck two minutes after the restart to secure a point for a Palace side who were far improved after the break.

Although this result will do little for either side’s ambitions to claw their way up the table, the draw at least provides some momentum for Swansea and Palace to take into their next games.

1 David Clifford sends everyone back to their corners unbeaten
2 Six Nations: Ireland are contenders but England still the team to beat
3 Ashleigh Barty now living up to all her earlier promise
4 Six Nations: A 21st-century tournament that saw Irish rugby come of age
5 Limerick roar from behind to sink Tipp and start league in style
Real news has value SUBSCRIBE