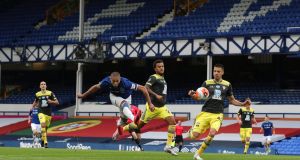 Talk of Europa League qualification should fade into silence at Everton after this fortunate draw with Southampton. Ralph Hasenhüttl’s team were superior in every department at Goodison Park but unable to add to their impressive run of results on the road due to the intervention of Richarlison.

Everton’s Brazil international ensured Carlo Ancelotti remains unbeaten on home soil and his team have avoided defeat at Goodison for 11 matches in all competitions, but that was the only gloss on an otherwise troubling evening for their manager. Everton were desperately poor and thankful the visitors had only one Danny Ings goal to show for their dominance of a first half in which James Ward-Prowse missed a penalty.

Only the top three in the Premier League have won more away matches than Southampton this season and their confidence would also have been massaged by Sunday’s victory over Manchester City. They were certainly the sharper, more intelligent side in the first half at Goodison where Everton started in the same insipid fashion that characterised defeat at Tottenham on Monday.

Following the latest no-show in a difficult away fixture by Everton – a recurring fault that has plagued not only Ancelotti but several predecessors – the Italian claimed his squad do not require wholesale changes but must improve their character and personality to compete “closer to the top end” next season. That seems a forlorn hope based on a catalogue of evidence from the past few seasons. Here was another demonstration of how much work Ancelotti has to oversee before his and the club’s ambitions match the realities on the pitch.

Southampton could have been out of sight before Richarlison pegged them back shortly before half-time with a rare touch of quality from a player in royal blue. Stuart Armstrong had the ball in Jordan Pickford’s net with only eight minutes gone after the prominent Ings crossed for Che Adams to tee up the midfielder, who had strayed offside.

Ward-Prowse had a powerful drive blocked by his own player, Adams, after another flowing move and a free-kick tipped over the bar by Pickford as the pressure built on Everton’s goal. The home side, overrun in midfield and defensively ragged, were being outclassed by a side that started the game beneath them in the table.

Pickford produced a superb reaction save from the corner that followed the Ward-Prowse free-kick, also taken by the Southampton midfielder. Ings connected with a near-post header that the England international tipped onto the bar with his right hand. The rebound struck his left arm and the bar for a second time but Everton failed to capitalise on the reprieve.

Ryan Bertrand delivered a deep cross back into the area where Ward-Prowse was sent tumbling by a clumsy Andre Gomes challenge. The referee, Lee Mason, had no hesitation in pointing to the spot, Everton players offered few complaints but escaped punishment once again when Ward-Prowse drove his penalty against the bar.

Even now there was no reaction from Ancelotti’s team. The pattern of a one-sided contest remained unaltered and Southampton finally took the lead in suitably chaotic style when Armstrong miskicked an attempted shot from 20 yards out. The ball trickled through to Ings, played onside by Séamus Coleman, who rounded the startled, static figure of Pickford before tapping into an empty net. A goal straight out of Sunday league football.

Remarkably, and completely against the run of play, Everton went in level at the break thanks to a moment of individual excellence from their Brazilian forward. Gylfi Sigurdsson, a replacement for the injured Gomes, released Lucas Digne in space down the left and the full back pierced the Southampton defence with an inch-perfect delivery from deep. Richarlison controlled superbly before beating the advancing Alex McCarthy with an emphatic finish.

Ancelotti reverted to a five-man defence for the second half with a right back, Djibril Sidibé, replacing a right winger in Alex Iwobi. The former Arsenal player forced McCarthy into his first save of the contest but was otherwise anonymous, as has been the case too many times since his £35 million transfer last summer.

Everton had their moments on the counterattack after the break. Dominic Calvert-Lewin squandered a fine opening created by Tom Davies and Jan Bednarek halted Richarlison’s run with a decent tackle that Mason deemed worthy of a booking. But their manager’s priority was clearly to stifle a sharper Southampton side and, in that respect, his tactical switch succeeded. The visitors continued to control the play without testing Pickford to the same degree. – Guardian

1 Ken Early: Frank Lampard’s problems start at number one
2 The Offload: Schools rugby talk in the Seanad appears tone deaf
3 All in the Game: Klopp gets the last laugh in quiz show
4 Rory McIlroy admits missing the crowds as he looks to end Major drought
5 Society can gain more than it loses by increasing crowd sizes
Real news has value SUBSCRIBE