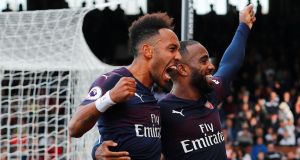 There was a period midway through the second half here when the away following in the Putney end revelled in a raucous chorus of “We’ve got our Arsenal back”. If there was an irony that it had taken a goal that might have been lifted straight from the pomp of the Arsène Wenger era to coax such a reaction, then their delight was still understandable.

This was a ninth successive win in all competitions. Unai Emery is making quite the impression.

The majesty of that third goal of the afternoon had typified their most convincing victory to date under the Spaniard with the excellent Alexandre Lacazette, Héctor Bellerín, Aaron Ramsey and Henrikh Mkhitaryan scything through befuddled opponents, Fulham utterly unable to cope with the speed at which the visitors shifted the ball. The substitute Pierre-Emerick Aubameyang would sprint on to Mkhitaryan’s clever touch to centre and Ramsey, another replacement making his first contribution and with his back to goal, improvised a back-heel that kissed the far post on its way over the line.

It was a goal to sum up a vibrant attacking display, one featuring Lacazette’s ruthless finishing, the athleticism of the forward runners and the subtlety of Mkhitaryan’s prompting from behind the forward. Fulham may have started brightly and could curse Aboubakar Kamara’s mistimed header when a second equaliser of the afternoon might have been theirs, but they were outclassed in the end. The brace shipped to Aubameyang in what time remained means they have conceded 21 times in eight league games. In the Championship, they could outscore all-comers. At this level, they can feel undermined. They will never be truly clear of trouble while they remain this porous.

And to think this contest had appeared to come laced with threat for an Arsenal team who had spent midweek on a 5,700-mile round-trip to Baku, with a quintet of their starters here having featured from the outset in Azerbaijan. The Europa League must feel a bind at times.

The hosts would naturally have sensed some vulnerability and, when they poured forward with that trademark zest to their approach play early on, they had stretched an error-prone backline. It had taken Bernd Leno’s fine left-handed save from Luciano Vietto’s shot, the German reacting to a sharp deflection off Rob Holding, to spare Bellerín’s blushes after a wayward early pass in the opening exchanges when Fulham were at their most spritely.

The goalkeeper was making his first Premier League start in the absence of the injured Petr Cech but, for all that Shkodran Mustafi summoned a fine block to choke Aleksandar Mitrovic’s side-foot attempt, would be beaten before the break as further sloppiness was punished.

Concentration seemed to waver at times as Arsenal sought to build from the back, with those across their rearguard too prone to the overambitious delivery. Holding had already escaped when, with the interval beckoning, Nacho Monreal’s stray pass was intercepted by André-Frank Zambo Anguissa. It still took Vietto to conjure a cute ball inside Holding and a clever finish from Andre Schürrle, lifting a first-time shot over the onrushing Leno, to yield Fulham their equaliser. Parity, as it happened, would be deceptive.

The second half proved as much. Whenever Lucas Torreira and Granit Xhaka stamped their authority across midfield, the visitors felt dominant. Alex Iwobi and Danny Welbeck were always lively and adventurous, making inroads down Fulham’s right flank to ensure Mesut Özil, sidelined with a back spasm, was not missed, while Lacazette made life decidedly uncomfortable for the home side’s centre-backs. It had been the Frenchman who forced them ahead just before the half-hour, Iwobi and the overlapping Monreal having combined down the left for the striker to collect, hold off Tim Ream, spin and finish crisply beyond the wrong-footed Marcus Bettinelli.

Lacazette, in truth, looked a class apart throughout. Had the chance that landed with Mikhitaryan in the six-yard box moments later fallen to the striker then the lead would surely have been doubled, so instinctive is the France forward’s finishing as he revels in such a fluent supply-line, but it mattered little.

Early after the break, a high ball was nodded inadvertently down to the striker near the corner of the penalty box and, sensing Ream had unwisely offered a yard of space, Lacazette ripped a fine volley that dipped beyond the startled Bettinelli and found the corner of the net.

Ramsey’s invention in the aftermath of Kamara’s miss effectively secured the result, though Aubameyang, running against dispirited opponents, was still to have his fun. He held off Maxime Le Marchand to spin and ram in his side’s fourth from close range, then collected Ramsey’s pass to guide a fifth emphatically into the corner.

This was Arsenal at their sumptuous best. For Fulham, so welcoming as hosts, it was all distinctly troubling.